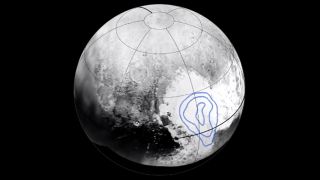 After your trip, keep reading for more on today's Pluto announcements.

NASA released a fresh batch of Pluto pictures and provided an update on the scientific findings of the New Horizons spacecraft of the distant planet.

Today's pictures detail "the heart of Pluto," the heart-shaped region recently named Tombaugh Regio after American astronomer Clyde Tombaugh, who discovered Pluto in 1930. New Horizons discovered this region is rich in carbon monoxide, the peak of which is on the western side of the heart (illustrated in this article's lead image).

The new surface images are 400 meter/pixel shots that present an incredible landscape. While some areas of Pluto are "peppered with impact craters" and therefore ancient in age, others, like Tombaugh Reggio, are young, meaning there are active geological events. There's even evidence of tectonics, the most obvious of which is mountains.

The image above shows an area 250 miles across, and the peaks you see tower over the local terrain as high as the Rocky Mountains in the US.

In "the heart of Pluto's heart" are icy plains, which lack craters but sport other geological features like hills. It's possible the area, north of the planet's mountains, is still undergoing geological transformations and looks to be no older than 100 million years. The region represented below has informally been named Sputnik Planum, or Sputnik Plain.

"This terrain is not easy to explain," Jeff Moore, leader of the New Horizons Geology, Geophysics and Imaging Team (GGI) at NASA's Ames Research Center in Moffett Field, Calif., said in a NASA post. "The discovery of vast, craterless, very young plains on Pluto exceeds all pre-flyby expectations."

For a better sense of where the plains are located, check out the short video below:

Thanks to New Horizons, NASA ascertained Pluto's atmosphere is nitrogen based. However, since the planet's gravity is so week, scientists say the atmosphere is escaping into space. Fran Bagenal, New Horizons co-investigator, University of Colorado, Boulder, said that about 500 tons of material per hour is escaping from the planet. Over the lifetime of Pluto, Bagenal said this amounts to between 1,000-9,000 feet of nitrogen ice being blown from Pluto, a phenomenon that has geological implications.

This escaped nitrogen, combined with solar winds from the sun, also creates an ionized tail behind Pluto, visualized in the graphic below.

The information released today just begins to scratch the surface of what New Horizons has gathered. According to Alan Stern, New Horizons principal investigator at Southwest Research Institute (SwRI) in Boulder, Colorado, the spacecraft has 50GB of on-board data, about 1GB of which has made it on the ground.

The new images and data come at the end of a Pluto-tastic week. Tuesday saw our first high-res look at the celestial body, while Wednesday we got an up-close peak at the planet's icy terrain. Scientists discovered frozen mountains in its heart-shaped region, and the surface in the particular pic was surprisingly youthful (less than 10 million years old).

Pluto may have been the star, so to speak, of the week, but its largest moon, Charon, also came into focus, while we got our very first look at Pluto's farthest planet, Hydra.

On Thursday, NASA released another image of Charon, this time with an insert that shows part of its surface in greater detail. The image holds what NASA called a "captivating feature," a depression with a peak in the middle, visible in the upper left hand corner of the insert.

The New Horizons spacecraft is now more than 2 million miles from Pluto, and it's performing according to plan. Jim Green, director of Planetary Science at NASA Headquarters in Washington, said that by next week, we'll have 5-6% of the information gathered by New Horizons back on planet Earth.