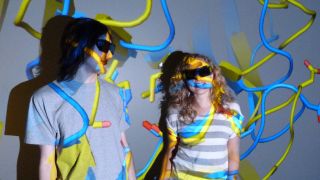 Plus size - "We're pleased," says Google about the growth of Google+. It's really too easy to bash Google+ and we prefer a challenge so that's all we have to say about that. [TNW]

Job lot - We're not sure how long this is going to keep qualifying as news, but some more pictures of Ashton Kutcher as Steve Jobs have emerged from the set of Jobs. He looks a lot like Steve Jobs. [Cnet]

Virtual disco - The University of Sheffield is using Virtual Reality (VR) to interact with molecular data in stereoscopic 3D. Sounds complicated but looks like a cool indie disco (See above)! We'll be there with the ciders in five, guys. [PR]

Cartographers, assemble! - TomTom wants to ease Londoner drivers' pain during the big sporting event that's coming up by creating a "map task force" which, as task forces go, sounds like a terrible one to be on. Anyway, they're going to keep traffic flow, restrictions and temporary road closures up-to-date on their satnavs so it's a worthwhile cause. [PR]

Light fantastic - The London Eye is going to be lit up every thirty minutes based on the mood of tweets sent during the Olympics. We hope EDF Energy has plenty of muddy browns, dingy greys and angry scarlets handy. [EDF]

Risen - Become the Bat Man and prowl Gotham City with The Dark Knight Rises Z+ app which uses a context driven player to play you a range of audio 'scenes' from the film based on your location and the weather and that kind of thing. We're all for adding a bit of drama to your day but maybe watch the film first, yeah? [TNW]

Trippy - Intel wants to remind you that creative types aren't actually legally obliged to use MacBooks – its Ultrabooks are just as arty, thank you very much. So it's teamed up with Hellicar & Lewis to create some interactive installations in a showcase it calls Triptych, complete with bespoke soundtrack. [PR]

Why does it always rain on me? - Not an app that will get a great deal of use in the UK this year, but the Solaveil Sun Care team have developed a new app that uses GPS data as well as info about your skin and hair type to alert you when you need to reapply the sunscreen. Nifty! [Solaveil]

Bonus tech video of the day - What phone would Patrick Bateman use?