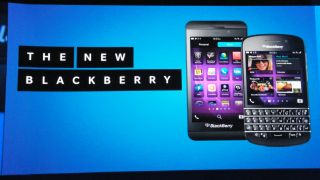 If you've seen The Lion King - and if you have kids, or if you ever were a kid, you've probably seen it hundreds of times - you'll know about the Circle of Life. "It moves us all through despair and hope, through faith and love," says Rafiki the baboon, who also notes that "the past can hurt... you can either run from it or learn from it."

That's true in tech, too!

This week, we saw the circle of life in full effect: one noble platform died, and a new one was born - and we found ourselves wondering whether the company formerly known as RIM would run from the past or learn from it.

RIM used to be the king of Pride Rock, the go-to phone firm for road warriors, executives and email addicts, but as Mufasa says, "a king's time as ruler rises and falls like the sun" - and in recent years RIM's sun appeared to be setting. The BlackBerry platform has lost market share to Apple and Android, and its brand new BB10 operating system, which is designed to see it through the next decade, has been plagued by delays.

It's exciting stuff, so exciting that RIM-sorry-BlackBerry's European MD made himself look like Rafiki's backside during a BBC interview when he was so excited he couldn't answer any questions.

BlackBerry might not be good at answering questions, but we are - and the big one is, of course, "are the new devices and the new OS any good?" Reviewing the BlackBerry Z10, John McCann is cautiously impressed. While the BlackBerry Z10 is "an unassuming slab of black glass and plastic which mimics the general aesthetic design of many a smartphone" and feels a bit plasticky, it is "a decent all round phone" with a good camera, a decent messaging hub, lightning fast web browsing and other goodies. However, "the jury is still out on BlackBerry 10." It's nice to see a new OS, but not everyone wants to learn yet another system. In a word, it's "decent" - pretty good, but not jaw-droppingly brilliant.

That's a worry, says Gareth Beavis, because BlackBerry faces "an almost impossible task to win over smartphone users". There's "a massively understocked app store compared to rivals", it isn't cheap, and there aren't any must-have "killer apps". Here's the d-word again: It's a "decent enough product", but it doesn't offer "a game-changing experience".

"Five years ago that would have been enough," Gary Marshall says, "but today many are wondering whether a good-enough phone is good enough to save the BlackBerry platform. What happened? Ten things spring to mind." Marshall's list of major strategic mistakes, idiocy and sheer bad luck reads like a Carry On film - Carry On Losing Market Share, perhaps - featuring Bono, twin CEOs, riots and massive network outages. However, as Pumbaa the warthog points out, "you got to put your behind in your past" - and by binning the RIM name and its old OS, the newly anointed BlackBerry has done just that.

As the new BlackBerry said hello, Symbian said goodbye: Nokia's venerable mobile OS is no more. Marshall shed a tear. "We've gone through an awful lot of Symbian phones over the years," he recalls, but "Nokia neglected what [CEO] Stephen Elop would later describe as a 'burning platform', failing to take the iPhone threat seriously enough quickly enough, inventing but not shipping devices awfully like today's iPhones and iPads, and getting bogged down in bickering and bureaucracy... in Symbian, Nokia had an OS - but what it didn't have was time to build an ecosystem to rival Apple and Google." Here's hoping BlackBerry doesn't follow in its footsteps.