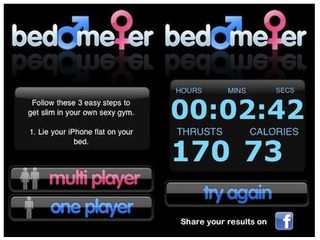 Are you sat on the iPhone? It's the new 'I'm just looking for the soap'

A basic calorie-counting and timer application has found itself at the centre of an iPhone/sex/internet keyword perfect storm this week.

It's all thanks to the app being given a catchy name - the Bedometer - and declared the very latest in bedroom activity (sex) monitoring tools.

According to the ever-reliable Sun newspaper, the app was invented by Livvy Thompson, 25, in an effort to get her "lazy" boyfriend to take a bit more interest in the thrilling female hobby of calorie-counting - by measuring the "intensity" and length of each bed-based period of sexy-exercise and how much energy their fumblings consumed.

It does so by being placed on the bed, then using the iPhone and iPod Touch's accelerometer. We're sure it's extremely accurate.

It sounds like it's going to be extremely accurate, possibly even a medically certifiable health device. The Bedometer app's up on the Apple Store for 59p. Presumably Apple skipped or at least toned down its usual rigorous testing processes for this one.

Meanwhile, fans of Google's Android operating system have some astonishingly fashionable and aspirational lifestyle apps of their own to play with, such as the incredibly useful Estimate Horse Weight.

We doubt The Sun will be mentioning this, not even in the sports section. Estimate Horse Weight by Equine Form may come in extremely handy if you ever need a rough approximation of how much a horse weighs, with the Android app guessing how heavy your horse - or a neighbour's horse or a horse on TV (the fun never stops) - is by extrapolating data based on its height and girth.

TARGET WEIGHT: Or, to save time, put the horse in a bath and measure the weight of the displaced water

The possibilities for roughly estimating the weights of horses are limitless. Who says Android hasn't got many fun apps?

Those of you on low-bandwidth devices will have to forgive us for doing a video-based update again this week, but we must - the whole internet is reverberating from gasps of amazement at footage of the Bill Paxton pinball machine.

Manufactured by established awesome-thing-maker Ben Heck, who usually shrinks Xbox 360s into small cases and puts keyboards onto things you wouldn't normally expect to have keyboards on them, Bill Paxton Pinball is the culmination of five years of work, and incorporates lines of Paxton dialogue as well as images of the star.

MICHAEL BIEHN INVADERS: Then we'll have a go on Sigourney Weaver Tennis

Ben's Paxton Pinball photo gallery is online here, if you're a Bill-loving billionaire looking for the ultimate in Bill merchandise to place in your Bill Paxton gallery.

Google's Street View is once again proving its worth as a global slow-news-day saviour, with Suffolk news source EADT24 bravely reporting sightings of a "UFO" via the reliable medium of (a) an email from a reader and (b) Google Street View.

Anyone who's spent any time at all leafing through Google's voyeur service looking for friends smoking on pavements will know that anomalies, apparitions, nightmarish disjointed faceless zombies and strange lights and smudges in the sky are actually the norm in Street View Land.

LADYBIRD OR MOTH: Or it might, at a push, be a hang-glider

We'd be much more thrilled to see a headline along the lines of "Non-distorted image discovered in Google Imaging Service" than some photo of a bird or fly being jazzed up as a UFO by someone in
a hurry to get their word-writing quota done for the day.