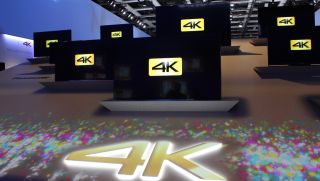 As far as years go, 2014 was one of the best. While we didn't get flying cars or hoverboards, home entertainment enthusiasts like myself got the LG 65EC9700 OLED TV, Tidal music streaming service and Amazon Echo, all in the same year.

But having so much cool A/V tech in 2014 presents a problem: What can possibly happen in 2015 that could top last year?

If it wasn't for CES 2015 it'd be easy to throw in the towel, buy one of the last plasmas on store shelves and go on living our lives like it's still 2014. Fortunately the mother of all technology shows gave us hope that there's a brighter, louder and more crisp tomorrow - all we need to do is be patient.

So, while we patiently await the hi-fi revolution Sony has promised us and LG's line of gorgeous - and I mean gorgeous - 4K OLED panels to drop in price, let's take a look ahead at the products, services and buzzwords that will consume every penny of my salary in 2015.

Before we walk the walk, we've got to talk the talk. Here are five terms you need to know in the new year:

4K / UHD - Almost everyone knows these two by now, but for the sake of review let's go over them one more time. 4K resolution is a misnomer of sorts; it describes any display device that has a horizontal resolution of 3,840 pixels. UHD on the other hand is a more general term introduced at CES 2013 that denotes any service or product that produces a picture beyond standard HD, generally referring to 4K or 8K.

OLED - OLED is awesome, plain and simple. Not enough for you? Fine. OLED, or organic light-emitting diode, TVs don't have a backlight in the traditional sense. Each individual pixel carries its own current and therefore can be individually controlled. Want a super bright pixel next to one that's completely black? No problem. OLED enables a TV to have a better contrast ratio and increases clarity whether you're standing far away or right up next to it.

HDR - HDR stands for high dynamic range, a concept content makers and manufacturers stole from digital imaging. HDR is used both to describe the way video is shot and how it appears on your 4K TV. Videographers capture darker shadows and brighter whites during the shooting process, then will separate them to create a wider array of possible colors.

Quantum Dot Displays - Another product in the "it's existed for years, but is just now coming to TVs" category is quantum dot. These little, bitty plates of nano-crystals sit between the backlight and LCD panel and enhance color depth by 20-30% by producing shades of color before hitting the red, green and blue sub-pixels. Both Samsung's new SUHD TV and LG's UF9400 4K UHD TV, due out later this year, will use variations of quantum dot.

Hi-Res Audio - Hi-resolution audio is the brilliant audio standard coined by Sony that, as they say, "is difference you can hear." If you understand lossless media, the idea here is the same: Capture the original recordings at 96kHz/24bit (or higher), keep the file as uncompressed as possible and stream it over Bluetooth to another Hi-Res-equipped device using a new codec called LDAC.

Current page: Buzzwords to know in 2015