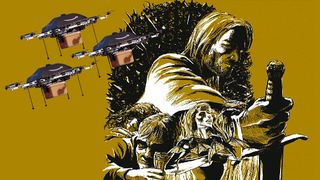 Fly, my pretties! Fly high above the Earth and its meddlesome taxes!

It's been a closely guarded secret and it's no doubt cost a fortune, but at last Amazon can unveil its latest big idea: Project Get Amazon In the Papers On The Busiest Shopping Day Of The Year.

But while the timing of Amazon's Prime Air announcement is thoroughly cynical, the idea itself is perfectly reasonable.

Amazon envisages a system where orders weighing around 2 kilos or less can be delivered by drone in less than half an hour.

The jokes write themselves, of course. It's fun to imagine a world where the city smog consists of millions of little Amazon drones battling their Tesco rivals, blasting us with ads and delivering pizzas to stoners, but while that's a little far-fetched the numbers are compelling.

Some 86% of Amazon's deliveries weigh less than the drones' 5lb maximum payload, and that number would easily exceed 99% if Amazon didn't keep sending microSD cards out in cardboard boxes big enough to hide bodies in.

In cities at least drone deliveries makes a lot of sense, provided we can iron out some of the obvious issues: security, safety, reliability, weather, environmental impact, hacking, jamming, kids with air rifles, amorous birds and so on.

Five years sounds awfully ambitious, bordering on the miraculous, for solving all of that, but clearly it's a case of when, not if, delivery by drone becomes practical.

That's assuming we want it. As the saying goes, be careful what you wish for.

"As the saying goes, be careful what you wish for."

Skies dark with drones aren't just bad news for would-be Dominos delivery drivers. Slowly but surely, Amazon is removing human beings from every part of the retail industry, one of the few large-scale employers we have left.

Its online sales have trashed thousands of in-store jobs, its recently-acquired robotic division wants to get rid of most of its beleaguered warehouse staff, and in the foreseeable future drones and maybe driverless cars could make even delivery drivers redundant.

It doesn't pay huge amounts of tax to help fund the public sector, and don't forget about Amazon's Mechanical Turk, which is doing a pretty good job of driving down wages for white collar work.

Amazon has seen the future - a shiny, digital and largely human-free future where everything you could possibly ever want is only ever 1-Click away and delivered either digitally or by drone. I'd love to know where we're going to work so we can afford to shop there.