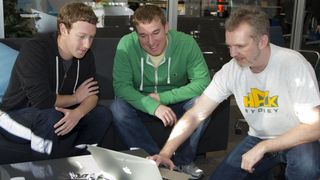 It's been ten years. Ten years since some posh US school nerds developed an exclusive social network for themselves, probably to make the scoring out of ten of their female colleagues' attractiveness a little bit easier.

Then it went global and, because we all sit on computers all day and like looking at photos of other people and gossiping, it somehow became almost compulsory to have a Facebook profile - if only for reassuring people and distant family members you used to know that you're still not dead.

It was cute, but has Facebook really changed our lives to such an extent that we'd miss it if it was gone? It certainly spearheaded the self-obsessed, narcissistic, selfie generation we now see, encouraging the internet warriors of the mid-2000s to emerge from behind their anonymous avatars and start writing online under their actual names.

But given how much people hate it - and how many people claim to never even use it - you'd think Facebook was still used by a handful of kids, not the 1.2 billion people who regularly log in.

The bitterness is everywhere. Beneath a workmanlike SEO list feature on the Daily Star, reader Jon Scott came up with an additional way in which Facebook has changed lives over the last decade, suggesting: "Fact 11: Facebook has split up more families and ruined more marriages than any other website."

Only if you leave yourself signed in, Jon. Incognito mode, sign out, delete cache after every visit and it's all fine.

Guardian reader Odl2000 summarized most normal peoples' feelings toward Facebook with his comment, suggesting that: "Facebook has become a necessary evil in my life. If I leave I miss out on invites, photos and announcements that now happen only there."

But he's not happy about the situation, explaining: "I stay and I'm subjected to the gradual and complicit erosion of my privacy and the daily, eye-gougingly boring updates from people I wish you could unfriend, but can't because they would take it as an insult akin to me calling their dad a donkey-f*****r."

Listen up, Odl2000. There are zones. If you bother working what all the menus and dropdowns do, you can put the boring people into a sort of purgatory feed where they don't know you secretly hate them and their petty lives.

Xarquid joined in with the battle to appear to be the most bored of it all, outlining his lack of affection for the site with: "The newsfeed is the same old tedium: how many miles someone ran, someone having a go at a motorist who cut them up, moan, bleat, whine ... the new fad of posting links to all these list sites and daft videos with the captions 'brilliant' or 'you've gotta see this' killed it off for me."

Putting more of a downer on the birthday celebrations is the emerging trend of the "neknomination," a staggeringly dumb new way the kids have found to get drunk, briefly internet famous and, in some extremely sad cases, dead.

On the Independent, beneath a quote from Facebook saying that it wouldn't be banning neknominate pages even in the face of deaths linked to the bizarre boozing trend, there were the sorts of incredibly insensitive comments that show internet users in their worst light. A person shielded behind the anonymous user name of Cos Lettuce said the sad death of a young man is "Darwinism in action."