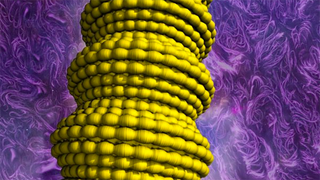 A team of nanotechnologists at the University of Texas has created artificial fibres that conduct electricity and can be reversibly stretched to more than 14 times their initial length. It's hoped they can be used to create artificial muscles, as well as super-elastic electronic circuits.

The group, led by Ray Baughman, made the fibres by winding sheets of carbon nanotubes around a rubber core while it was being stretched. When it was relaxed again, the nanotube coating buckled like a compressed accordion, allowing it to be stretched again in the future.

Carbon nanotubes are electrically conductive, and so are the new fibres. But rather than conductivity decreasing when the material is stretched, like a conventional fibre, it maintains it - making the substance perfect for situations that require a degree of elasticity.

Top of that list is artificial muscles - which could be used in miniature chemical analysis devices to pump liquids, or to rotate mirrors in optical circuits. But there are a massive list of other possibilities too - from exoskeletons and robotics to failure-free pacemaker leads and stretchy cords for phone chargers.

"The rubber cores used for these sheath-core fibers are inexpensive and readily available," said Raquel Ovalle-Robles, a co-author on the paper. "The only exotic component is the carbon nanotube aerogel sheet used for the fiber sheath."

The discovery was detailed in the journal Science.