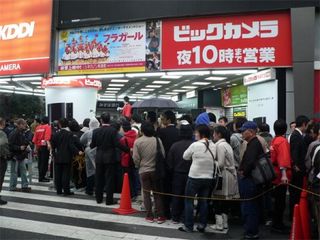 American bargain hunters eager to snap up £400 plasma TV sets went on the rampage at a Wal-Mart shop on Friday, killing a store employee in the crush.

The so-called Black Friday discount event at a Long Island Wal-Mart saw a mob of 2,000 people trample 34-year-old Jdimytai Damour underfoot when the shop opened at 5am. He was pronounced dead an hour later.

Four others were injured as a queue of customers that been in line since the early hours, waiting for the traditional Black Friday bargains, surged into the shop. Among the goods on sale were cheap electronics, clothes and white goods.

Another Wal-Mart employee described the crush, saying, "They took the doors off the hinges. He was trampled and killed in front of me."

A would-be shopper added: "They were jumping over the barricades and breaking down the door. Everyone was screaming. You just had to keep walking on your toes to keep from falling over."

Other witnesses reported that frenzied shoppers refused to leave, even after being told they'd killed someone. One refused, saying, "I've been on line since Friday morning."

After closing the store to deal with the situation, Wal-Mart said it had taken appropriate security precautions from the beginning and reopened at 1pm.