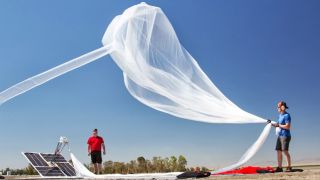 At the recent Ted conference, Google CEO Larry Page was on hand to discuss 'moonshots' which, according to the company's definition, are those outlandish ideas hanging out "in the grey area between audacious projects and pure science fiction."

The dreamers in Google's secretive X Labs, where the ideas prepare for take-off, are bringing new thinking to some of the most pressing issues in technology and science, tearing up the playbook and starting from scratch.

The company seeks ten times improvement rather than incremental 10 per cent gains with its X projects, which are also inspiring others, such as Facebook and Amazon, to dream bigger.

Google Glass is proof that a moonshot can experience a successful surface landing, but the revolutionary AR headset is only the beginning.

Google and other innovative thinkers with the necessary bank balances hope to elicit seismic shifts in the way we connect the world, navigate it more easily and even live in it for longer. Here are some of tech's greatest moonshots.

Perhaps the most outlandish of all Google's 'moonshots' is the plan to bring balloon-powered internet to the 5-6 billion people on Earth who currently have no or limited access to the wonders of the supposedly world wide web.

The company plans to have a continual flow of self-aware balloons moving around the planet, on the edge of space (65,000ft). Those balloons will flock together to remain equidistant and use a range of sensors to ensure they stay at the right altitude and don't float away on the breeze.

The idea is to enable constant connectivity to be beamed to Wi-Fi antennas on the ground, allowing remote villages to gain access to healthcare advice, education and weather forecasts. Might it work? It's just loony enough to do so.

Jeff Bezos is no stranger to moonshots, he has his own privately-funded space exploration company, Blue Origin. But keeping things sort of terrestrial, Jeff also has plans to revolutionise home delivery forever. Late last year he announced Amazon Prime Air to the world, a drone-powered service that would allow small packages to be delivered to homes and businesses in major cities within 30 minutes.

Jeff has to wait until the FAA sets regulations for the commercial use of unmanned aerial vehicles, but then his army of automated octocopters will be dropping off smartphones and George R.R. Martin books.

No wonder some folks in the US are already calling this skeet shooting with mystery prizes.

Tesla Motors boss Elon Musk is another tech entrepreneur with his mind set on conquering the solar system. However, more than anything, this real-world Tony Stark just wants to ditch the hassle of airports for cross country trips.

The proposed above-ground Hyperloop transportation system would shoot around the USA in low-air-pressure tubes and be powered by induction motors. He reckons he'll be able to transport folks from San Fran to San Diego in half an hour, traveling at speeds of 800mph.

He's not the first to dream up vacuum-assisted travel, Popular Mechanics featured concepts on the front cover in 1950 and again in 1957, but Musk is perhaps the only one with enough swagger to make it a reality.

Sorting us all out with driverless cars and connecting the world via balloons is one thing, but next up for a healthy infusion of "moonshot thinking" are two problems that have bothered the human race for slightly longer: Aging and death.

Enter Calico. The Google Ventures backed start-up, helmed by the Apple Chairman and biotechnology pioneer Art Levinson, is focused on life extension, by tackling mental and physical ailments that bother us in later life. Curing cancer will not be enough, says Larry Page.

Naturally, Google's vast experience lies in data crunching so what can it apply to medical research that'll help us unlock the mysteries of mortality forever?

Google isn't the only driving force (get it?) behind automated automobiles, but it is the one with the best shot of making it happen. A driverless revolution pushes us closer to the utopian idea of no accidents, no drink driving, fewer traffic jams, less pollution and zero human error.

Google's fully automated vehicles have already racked up half a million miles around San Francisco with no incident, while the UK government has backed a scheme that'll see FAVs on the road by 2017.

Google is more likely to be the ones pushing software than the vehicles themselves, by the likes of Audio, BMW and Volvo and Mercedes are already making great strides.

Mark Zuckerberg seems to have taken on the mantle of an internet philanthropist these days. While Bill Gates battles malaria, Zuck is using his own vast resources to try and get those same folks online.

Sort of a cross between Amazon Prime Air and Google's Project Loon, Facebook's Connectivity Lab moonshot aims to use unmanned aerial vehicles (UAVs) and geo-synchronous satellites armed to the teeth with internet connectivity. The Internet.org project calls for solar-powered drones, which can stay airborne for weeks at a time, positioned at 65,000 feet.

They'll beam connectivity directly to devices via infrared laser beams. Facebook has hired experts from NASA's Jet Propulsion labs to help them achieve the goals, but hasn't set a timeline. There was rumour it was going to buy up drone company Titan Aerospace but that, instead, went to Google.

While Google is on the cusp of a metaphorical lunar landing with its Google Glass moonshot, the company has no plans to stop there. Next on the agenda is a smart contact lens that could provide a life-changing solution for diabetics.

The company has developed a prototype lens with a tiny microprocessor that can sense glucose levels in tears. The company thinks it can be an early warning system for sufferers experiencing low blood sugar. Google is also experimenting with integrating an LED light to notify the wearer, while connected apps could eventually make the data available via smartphones.

Tech moonshots aren't a new thing, however. By 1992, the Cold War was starting to become the 'you should probably wear a sweater minor disagreement,' prompting the United States to abandon the grandest missile defence system ever.

Project Excaliber was conceived in the 70s and was all set to be the first nuclear-powered, space-based device that'd halt a Soviet onslaught by firing multiple X-ray lasers at missiles in order to vaporise them or knock them off course as they approached their target.

The project was deemed out of the reach of current technology, and had been ditched by the time Bill Clinton came to office.

Project Ara: your next smartphone is one you'll build yourself