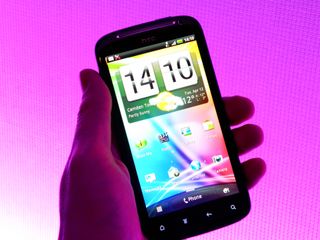 Last week the tech world thrilled to news of new Apple things, but this week it's Android's turn in the spotlight - for good reasons and for bad.

There's some tasty new kit on the horizon, but existing HTC Desire owners have been diddled around. And we don't mean that in a good way.

Tasty tech first. Specs have emerged of the forthcoming Nexus 3, the Google-branded smartphone that acts as a flagship for the Android platform.

Designed to run Ice Cream Sandwich, the latest and most stupidly named version of Android yet, the Google Nexus 3 promises a "monster-sized" screen, a dual-core 1.2GHz or 1.5GHz TI OMAP 4460 or Qualcomm Snapdragon processor, 1080p HD video capture via a 5MP camera and no buttons. Sources say the handset's navigation will be entirely software-based, just like a certain phone from Cupertino.

That's not all. US customers will get 4G connectivity - meaningless over here so far - and everybody benefits from an ultra-thin casing. With an anticipated US release date of November, it shouldn't be long before Google does an official reveal.

So far, so straightforward - which you can't say about HTC, who managed to confuse everyone with its plans for upgrading Android on HTC Desire handsets. First, it said that Desire owners wouldn't be able to upgrade to Gingerbread. Then, it changed its mind. There's still no word of when the update will actually happen, but we're sure it'll be sooner, or perhaps later.

HTC yesterday said it would have to strip out some unnecessary apps to make room for the release.

It's easy to mock, but HTC's dithering over the Desire doesn't do Android any favours. As our very own Gareth Beavis points out, "HTC must have seen the pain networks went through last year with the delayed Android updates - consumers getting increasingly irate on forums at perceived idiocy and apathy and in extreme cases leaving the network altogether, so I assumed it was a lesson learnt and brands would know not to mess around with mixed Android messages again."

The Desire update isn't particularly important in the great scheme of things, but all the faffing around has generated lots of unfavourable publicity.

When will you get the Gingerbread update?

If you're waiting for an Android 2.3 update and want to know when you'll get it, we've made a page just for you: we're tracking the updates for all the major manufacturers.

If you don't already have an Android phone and fancy getting your hands on some Gingerbread goodness, you might be interested to know that Vodafone's exclusive deal to sell the HTC Sensation - a phone we really, really like - is coming to a close, and you'll be able to get it on O2 and Orange from July. If you haven't already, check out our HTC Sensation review.

Elsewhere, it was bad news for Acer: the firm has dramatically revised its tablet sales targets from "loads" to "not so many", dropping its forecast by almost 60 per cent. Instead of selling between 5 million and 7 million tablets in 2011, the firm now expects to shift around three million.

That's partly because the 7-inch Iconia Tab A100's release date has been pushed back to later this year, but it's also because Android tablets aren't yet doing the numbers many expected: for example, Motorola says it shipped - that doesn't necessarily mean sold - 250,000 Xoom tablets in the first quarter of 2011, but industry analysts suggest Apple is doing nearly two and a half million tablets per month.

Expect Android numbers to rise significantly this year as Android Honeycomb becomes widespread and the number of tablet-focused apps in the Android Market explodes.