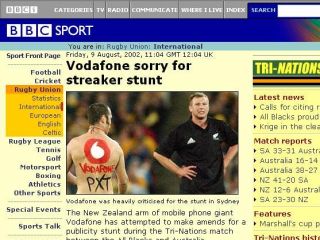 Streakers can cause a problem for tech firms. But sometimes it's their own fault

What does a big-money tech PR effort need? A big stunt. Trouble is, for every iPlayer flying penguins episode, Threshers e-voucher and

piece of genius, there are those campaigns that just make you put your head in your hands. Here's our round up of the worst tech PR stunts we've yet seen. Have you any to share? Then leave them in the comments.

In March this year, Mars brand Skittles decided to go social, incorporating a live Twitter feed on Skittles.com alongside content from Facebook and YouTube, on the advice of Agency.com. Trouble was, the feed pulled in absolutely all tweets featuring the name Skittles. Naturally, Joe Public quickly cottoned on to the fact you didn't necessarily need to be complimentary about the coloured candy to get on the page. The page was soon changed, but the Chatter section of the site still leads to a Twitter search for Skittles. A backfire undoubtedly, but it did get everybody talking about some dullard sweets that don't taste as good as Smarties. Well, they don't!

Getting Seinfeld to star alongside Bill Gates was no doubt a stunning stunt on paper. $300 million of paper. But the ads didn't even reinforce the Microsoft brand properly and Seinfeld was paid a reputed $10 million for appearing. The first ad was a 90-second affair, showing Seinfeld assisting Gates in choosing a pair of shoes. But our 'favourite' moment is in the second four-minute vid: Gates is reading a technical manual to a kid at bedtime. "Are there any monsters in this story?" asks the kid. "Yes, but there's a firewall," replies Gates. Terrible, terrible, terrible. And we don't even want to think about the Internet Explorer 8 vomiting incident.

Earlier this year, SpinVox had to refute allegations that a great deal of its automated text-to-speech service was, in fact, processed by humans in call centres, which ended up with Spinvox desperately firefighting and going on to employ uber-PR firm Brunswick to help it out. To try and assuage the voracious criticism from journos such as the BBC's technology correspondent Rory Cellan-Jones, the Marlow-based company decided to invite journalists to its offices for a presentation and demo. Trouble is, the demo (albeit under restricted conditions) failed to convince and only succeeded in proving that Spinvox's service needed the human element to work properly. Although two messages read by Spinvox CIO Rob Wheatley were automatically transferred perfectly, faster messages left by the journos present were redirected to the human assistant.

4. Sony gets its goat

Legendary in gaming circles, Sony Computer Entertainment created a storm after a launch event for the God Of War II game in Athens featured a dead goat. "The event was a theatrical dramatisation with a Greek mythological theme and, as part of the set dressing, a dead goat was provided by the production company from a qualified local butcher. There was never any question of journalists being able to touch the goat, or indeed eat the soup direct from the body of the goat, as one report has alleged. The goat was returned to the butcher at the end of the event," said Sony in a statement.

Earlier this year, Eee PC manufacturer Asus decided to ask people to blog about products they were given for review. Readers would then be able to vote for their favourite, with the winner able to keep hold of their kit forever. Sound simple? Not quite. Readers have a habit of voting for honesty rather than puff, and it appeared that Asus wasn't too impressed when blogger Gavyn Britton came out on top as it was decided the bloggers would have to vote for each other to decide the winner, something that wasn't lost on The Inquirer. However, Asus was keen to point out that there had been some voting irregularities. "It had become apparent that some people's manipulation of the voting system had effectively invalidated the whole voting process. [It was] decided that rather than announce the results of a rigged vote, they needed to urgently adopt a different voting policy (one vote per blogger for their favourite blogger)." Asus added that it was "very disappointed that an external influence, and an influence outside of any of our control, has unfairly tarnished the reputation of this competition."