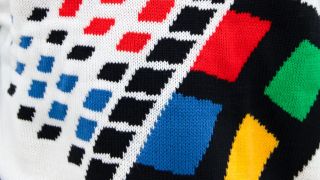 As you’ve more than likely noticed, the holiday season is now in full swing, and that means – at least for some folks – that it’s time to don a whole range of ridiculously tasteless clothing, from silly bobble hats through to the traditional gaudy sweater, and Microsoft is apparently poised to release a Windows 95-themed offering when it comes to the latter.

According to the firm’s official Windows Twitter account, at some point today, we can expect not a new piece of software, but a new piece of ‘softwear’ – did you see what they did there? – with an image provided of what looks like a chunky-knit sweater displaying a Windows 95 logo.

Is this #throwback sparking your #90s nostalgia? Tune in tomorrow for a major "softwear" announcement. 😉 pic.twitter.com/O1Na3fupeQDecember 12, 2018

Whether this will be the only offering, or whether Microsoft is planning a few pieces of clothing themed around 90s nostalgia and its software ecosystem, we shall have to see.

Maybe we’ll also get a Microsoft Office 95 scarf decked out in a colorful jigsaw pattern. Or a Microsoft Bob bobble hat.

Or maybe we won’t. Only time will tell.

We were hoping to buy a more contemporary Windows 10 tank top ourselves, but it looks like these won’t be ready in time now, as apparently the production line was halted by Microsoft earlier this week, after compatibility issues were discovered with some of the different color wool threads…