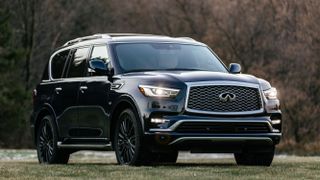 In the future, cars will be entertainment playgrounds. Imagine not having to drive at all on a long trip and letting the vehicle drive autonomously, curling up in a driver’s seat that’s more like a comfortable leather recliner at home, having surround-sound audio that matches what you hear in a movie theater (or is even better), and watching a movie in HD.

Ironically, other than the autonomous driving mode, the 2019 Infiniti QX80 feels a bit like it's ready for that imminent reality. There are two eight-inch screens on the back of the front seats, and the surround-sound audio proved amazingly good on a recent test. The seats are so comfortable the rear passengers can recline and relax, although for now you have to keep your eyes on the road and stay vigilant. The QX80 is well-suited to movies in particular.

One example: on a long trip driving on a highway for about three hours, I queued up a DVD for the movies The Incredibles 2. Because the QX80 is such a massive SUV, the sound radiates off the side walls and all around the cab. You feel every explosion. The two eight-inch screens play simultaneously (you can also control them independently).

The QX80 is also ideal for movies because of the gear that comes with the Theater Package. You’ll find two wireless headphones, a wireless remote control, an HDMI audio/video input, two headphone jacks, and a normal 120V power outlet for plugging in a game console or other devices.

I wasn’t able to test out whether an iPad can play wirelessly to the eight-inch screens as you can do with the Chrysler Pacifica, but I did connect an Apple iPad Pro using an HDMI cable and an adapter. That worked perfectly, and gave the passengers more control over the movie to select a different movie, fast forward through the dull scenes, or play a game instead.

The main issue with all cars on the road today, including the Tesla Model S, is that we're not even close to fully autonomous driving to the point where you can control all of the media playback. In fact, Tesla has been ramping down the settings more and more.

A customer recently fell asleep in a Model S sedan, and the police had to move in front of the car to make it stop – the procedure took seven minutes. It’s still not clear how the driver could stay on robotic driving mode that long, because Tesla forces you to confirm that you are still paying attention by touching the steering wheel.

We’re a long way from being able to fidget with the DVD player in the QX80 for a few minutes, swapping out the disc, adjusting the surround-sound settings, and fast-forwarding while we drive. I had to pull over to do all of those tasks, but even in a Model S, it’s not really technically possible at this point unless you want to steer at the same time.

How do we get there? I’ve been advocating for dedicated roads lately, because in places like California, there are sections of highways used only by trucks – it’s not inconceivable to add another road – divided from the rest of the highway – for stretches of autonomous driving. If that were the case, the QX80 is one of the first vehicles I’d use. If it drove by itself.