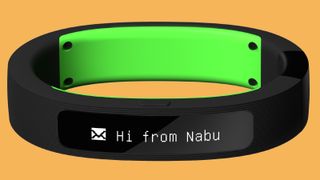 Razer's Nabu and Nabu X fitness trackers - geared towards its rabid fanbase full of gamers - are getting a major update.

Announced during the first day of PAX Prime in Seattle, Razer redesigned the Nabu based on feedback from users. The placement of the Nabu's button now rests on top while the clasp opens from the side and is magnetic. Razer calls it "side loading." The charge port has also been moved to the inside of the band.

The device will be compatible with the iPhone 5, iPhone 5S, iPhone 5C, iPhone 6 and Android 4.3 and up mobile phones. The Nabu also boasts up to six days of battery life and is splashproof. The OLED screen is 128x16 and displays a single color.

What about the X

The Nabu X isn't seeing any refreshes hardware-wise, but will be receiving a new companion app that the will also be compatible with the Nabu.

The app's UI will be vastly different from the current app and will provide a much cleaner, vibrant interface, better picture of the user's daily activity and sleep tracking algorithms.

The new app is in beta and Nabu X users can download it to try out today.

2,000 exclusive blue Nabu X trackers will also be given away for free to PAX attendees.