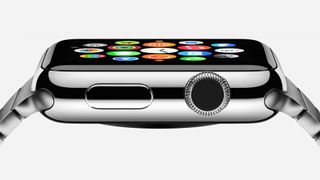 Apple is exploring new metals for its smartwatch.

By now you've probably twigged that Apple is holding a special event later today to tell us everything we need to know about its new wearable, the Apple Watch. The rumours have already started about the next edition of the device though, with a platinum model said to be in the pipeline.

The Apple Watches going on sale next month are available with anodised aluminium, stainless steel and gold casings depending on how much you want to spend. According to the Wall Street Journal, platinum is the next metal coming to the smartwatch at some point in the future, a material favoured by luxury watch makers like Rolex and Omega.

We don't know when it will happen or even if Apple will eventually take the plunge - but it's a timely reminder that this is just the first edition of the Apple Watch, and you should bear in mind potential future improvements if you're thinking of splashing out on one.

There's also plenty of chatter over potential new straps for the Apple Watch. We know rubber, leather and stainless steel are going to be on offer, but some commentators think Apple is going to unveil a gold link bracelet strap during its event today as well.

That would in theory push the price of the top-end Apple Watch to nearly US$20,000, though just how much the various editions are going to cost remains one of the big unknowns about the device.

The event kicks off at 5pm GMT / 1pm ET / 10am PT and Apple is putting on a live stream for anyone with a fairly recent version of iOS or Mac OS X. To pass the time until it starts, read up on everything we've heard so far about the Apple Watch.