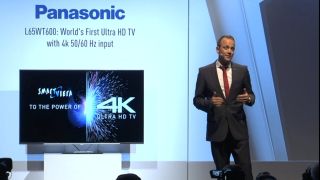 Panasonic is finally getting into the 4K game over at IFA 2013, announcing its first Ultra HD LED television, the Panasonic L65WT600A.

The WT600A is an update of its WT60 range, bringing in 4K as well as a triumvirate of world-firsts.

According to Panasonic, the WT600 is the world's first television to make use of HDMI 2.0, which means that it will be able to accept 4K signals and 50- and 60p.

This is the same signal range that UK broadcaster Sky tried out last week for the first time, with TechRadar in attendance.

Another world's first that has been jammed into the Panasonic L65WT600A is that it is the first TV to have a DisplayPort 1.2a. Having this lovely port on board means that there is now an easy connection from PC to the TV.

This is something, according to Panasonic, that will benefit video production companies and gamers alike.

The third and final world's first is that it is the very first television to have built-in HD.264kk decoder, which allows playback of 4K videos from USB stick.

This means you can play videos from what Panasonic coyly calls the "world's largest video service", which we are guessing is YouTube, and the TV also comes with a built-in HTML5 web browser.

While not a world's first, the WT600A will also be Europe's first television to come with THX 4K certification.

We are still waiting on the L65WT600's release date, Panasonic has said that it will be available in Australia from late August. We're also still waiting on its (probably huge) price tag, but as the first television to be announced at IFA 2013, it's very impressive.

Over to you Sony and Samsung.