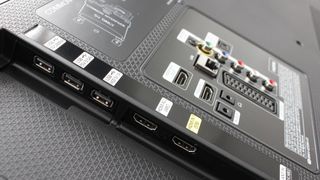 If you're in the market for a new monitor or video card these days, you've probably come across a weird, esoteric specification called High-bandwidth Digital Content Protection or HDCP.

For those who've never heard of it, HDCP is a hardware encryption specification created by Intel back in 2001 to prevent pirates from copying media and disseminating it online. It's found on every major TV and video card brand* and while it sounds good on paper, HDCP is bad news for people who like to use older hardware with newer TVs.

Previous versions of HDCP (2.1 and lower) protected content 1080p and below, but the newest revision, HDCP 2.2, is geared towards 4K copyright protection.

What is it? HDCP is content protection software that runs on TVs, receivers, gaming systems and video cards that stops users from stealing content
When is it out? HDCP 2.1 is the staple on most devices, but HDCP 2.2 is quickly becoming the new standard
Why is it bad? Older TVs with HDCP 2.1 may inadvertently block 4K signal from HDCP 2.2 devices like Blu-ray players, stereo receivers, soundbars and game consoles

A good rule of thumb is that if it's a top-tier TV made in the last two years, it most likely has the latest version of HDCP 2.2. If it's less expensive or made before February, 2013, it's probably version 2.1.

Warning: Always look into the TV's HDCP specification before you buy it. You don't want to buy anything now that won't allow you use HDCP 2.2 devices in the future.

Will PC gamers feel the effects of HDCP?

You'll need an HDCP 2.2 compliant video card to watch some 4K content on your PC in the future. You'll still be able to game on these monitors if you have an HDCP 2.1 video card, but Ultra HD Blu-rays will require you to have a HDCP 2.2 device, so you may need to upgrade your video card in order to watch them.

Currently, one of the only HDCP 2.2 compliant video cards is Nvidia's newly released GTX 960.

If you're in the market for a mid-level video card, I recommend the GTX 960 over other cards because of HDCP 2.2 alone. It has some of the best overall performance for its price (most cards are around $200/£160/AU$250), and its inclusion of HDCP 2.2 will allow users to keep it as a part of their systems for a very long time.

Does it affect other devices, too?

Whether we like it or not, HDCP 2.2 will find its way into sound systems, such as receivers and soundbars.

Soundandvision.com says you'll likely be greeted by a blank screen if you try to use your HDCP 2.1 or older reciever with your new HDCP 2.2 Ultra HD Blu-ray player.

In the future, we might even see streaming devices - like the next Amazon Fire TV or Roku 3 - receive the spec. It may come to Apple TV or the Roku Streaming Stick, and who knows, maybe even new consoles like the PS5 will require HDCP 2.2 as well.

If HDCP isn't good for consumers, why is it still implemented?

Many observers have surmised that media companies have pushed for the implementation of HDCP in order to keep shareholders happy.

Implementing the encryption method could be media companies' way of telling shareholders, "Hey, we're protecting your profits by using HDCP on all of our media."

To be fair, it does offer some protection for video content, but it comes at the cost of destroying compatibility with legacy hardware.

The splitter works by receiving an HDMI source from an HDCP video device and outputting a clean non-HDCP signal afterward. Not all splitters will circumvent HDCP, however, so be careful which one you buy.

It doesn't take much to break HDCP version 2.1, so we'll have to wait and see what methods can be used to get around 2.2's encryption.

Remember: Always look at a device's HDCP compatibility before you buy it.

Also, if you're buying a new receiver, make sure it's HDCP 2.2 so you can use it with HDCP 2.2 compatible devices down the road.

Unfortunately, anyone with old receivers and soundbars will likely need to swap out for HDCP 2.2 systems in order to watch an Ultra HD Blu-ray. Bummer.