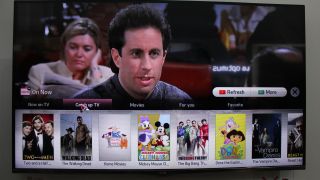 Gracenote is planning to take control of your TV.

The company, ubiquitous with music metadata services, has developed a suite of technologies that take the concept of interactive TV to an unprecedented level.

From next generation programme guides to personalised ad replacement, via fluff like The Million Second Quiz, the company is reinventing the very foundation of television.

At first glance, what Gracenote appears to be doing seems innocuously clever. The company has developed a next generation programme guide, due to make its debut on LG screens this autumn.

Called 'On Now', it presents a highly graphical interface of what's available to watch. Instead of scrolling through a traditional timeline, the On Now guide presents content by programme, genre, cast or crew. The viewer navigates from there.

"What we're trying to do now is move away from the grid," explains White. "The standard TV listing is a very dated navigation paradigm, one that hasn't really changed since the 1960s. So we're bringing together all available content, including over the air, Video on Demand and catch-up. The guide's not time based because no one watches that way anymore."

In addition to LG, Gracenote's parent Sony, along with Philips TP Vision, Loewe and OEM giant Vestel are all introducing variations of the system.

"One of the things we're doing for Philips is providing a personalised recommendation platform, based on a user profile," reveals White.

The algorithm fuelling this knowledge is based on the content descriptors in Gracenote's metadata. "We know things about the show, as you watch it. We can also deliver ads while you browse – the primary engine for all this is content comprehension..."

Demonstrations of On Now are certainly compelling, but this is just the start of what Gracenote believes will be an extraordinary change in our relationship with the boob tube.

The company has perfected an Automatic Content Recognition (ACR) platform, known internally as Entourage, which utilises audio fingerprinting to literally monitor what you're watching.

Taking advantage of the built-in microphone in tablets and smart phones, it's able to identify a TV show via snippets of dialogue and soundtrack. It's similar in some respects to rival wizardry from Shazam, but with an added important talent for synchronization.

"The idea is that the client on your mobile device is running a Classifier within an app, which listens to the audio or music on a TV show, then cross references it with our database."

Entourage works with any content, says White. "Right now we're covering something like two hundred channels in the US, a 100 plus in Europe and 14 in Japan."

Gracenote creates the fingerprints through listening stations around the globe. "We're listening to content as it's being broadcast, fingerprinting it and marrying it up to EPG data." Sony is preloading the technology on the Xperia Z1, dubbing it Track ID TV.

In the US, Entourage ARC provided the interactive backbone to hit game show The Million Second quiz. "It's an industry first," says White. "The studio integrated Entourage synchronisation into the official show app, allowing the audience to play along in real time."

The audience was given exactly the same amount of time to answer the questions as the contestants. High scorers were then brought into the studio to compete the next night. "The idea is to get the best players from the entire audience competing. It's never been done before."

White says there's been a surge from the creative community to leverage the technology, citing NBC Universal's SyFy channel as one of the more inventive.