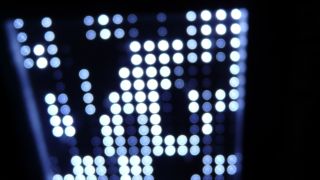 The future of TV?

OLEDs are hard to make in TV sizes. Smaller devices like phones have been using them for a while now, with great success. The problem is, when you try and make a TV of 50-inches or more you have production problems.

For 2015 Samsung has pulled all of its OLED TVs and has moved back to LCDs, some of which use a technology called "quantum dots" to produce a very bright and colourful image that comes close to the range OLED offers.

Quantum dot is desirable because making them is reasonably easy, and the yield should theoretically be the same as any LCD TV.

So what's next, and does Samsung have a secret weapon in TVs that it will launch soon? Perhaps, so here's what we know about the technology called QLED.

Is this quantum dot?

No, this is a different technology to quantum dot. In a TV that uses quantum dots a blue LED is used as a backlight source - more than one actually, but focus on just this one for now. This replaces the white LED that is in most LCD TVs with an LED backlight.

Why replace the white LED? Well, because there's no such thing as a white LED in reality.

To make an LED white you take a blue LED and put a substance in it that changes the blue light and makes it white. This is usually phosphor. There's no problem with this, but light from it isn't as pure as it could be, which affects colours and the phosphor also uses up some of the light, so the TV won't be as bright.

So, in a quantum dot TV the white LED is replaced with a blue one, and then some special liquids are used which glow a specific colour when struck with light. The colour they glow is dependent on the size of the dot - larger dots are used for red, and smaller for blue.

Because these colours are reasonably precise, the output needs less filtering, which helps with the output levels and accuracy.

So what is the next step from quantum dot then?

The technology which Samsung has been working on for a while is perhaps best called QLED. This is not a derivative of LCD panels as quantum dot panels are, but a new display technology.

The idea here is that instead of a layer of quantum dots producing light which illuminates an LCD panel, the LCD panel would go and the quantum dots would produce both the light and the picture itself. This would make the QLED basically the same as OLED, but perhaps simpler and cheaper to make. And without the shorter operating lifespan that's still an issue for OLED.

Sony has also previously demoed a technology at CES called "Crystal LCD" that works in much the same way. Instead of having an LCD panel that's lit from behind, the Sony technology creates an image from LEDs themselves. So what you in effect do is create an LCD TV that operates like a plasma did, or a CRT worked.

If it helps, imagine this technology with full sized LEDs.

Like all TV pictures you would have a red, green and blue LED arranged in a "pixel" together. The amount each of the three colours was illuminated by would affect the colour of the pixel, and thus produce the final image.

It's not really known if Sony is even pursuing this technology any more. It mentioned it once at CES 2012 and then hasn't said a thing about it since. But as with all such tech, it's possibly just waiting until it can produce the finished product at an affordable price, with good yields coming off the production line.

The advantages of these emissive displays are always the same though. Gone is the backlight, so you can get near perfect black levels. In turn, those blacks mean the contrast is great and the colour reproduction is much wider.

This all becomes important as we move toward 4K when we will also see wide colour broadcasts - as well as support announced from Netflix - and HDR. HDR is very exciting because it expands the detail in light and dark areas, it's arguably the most significant chance to TV since we went from SD to HD.

You're keen then - well as far as we can tell the most likely date for widespread QLED TVs is 2020, which is a very long time away, and that might cause some problems.

At the moment OLED isn't that practical because only LG has really managed to commercially produce TVs with that technology. However, Panasonic has invested significant money in its own OLED production facility, and shutdown plasma too. Sony has always had OLED sets on the go, and is bound to be working on new models. Even Samsung, with its interest in QLED is likely to be working on OLED TVs as well.

Meanwhile Fujifilm is doing some impressive-looking research on the matter too.

So it's perhaps sensible to consider whether QLED will replace OLED. While OLED is a great technology questions still remain about how well it will support new broadcasting services like high dynamic range as that tech relies on very bright images, which will cause OLED panels to age more quickly, thus reaching their end of life much faster.

So the future is somewhat clear, but the fine details remain to be worked out.

For now, quantum LCDs will continue to be mass-market TVs. After that we may see another plasma/LCD battle between OLED and QLED TVs, but only time will tell. So if you were going to wait for these new technologies, don't, go and grab a lovely 4K TV now!