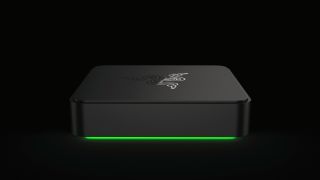 Announced during this year's Google IO event, Razer and the search engine giant have revealed a "micro-console" powered by Android TV that will stream content for large-screen entertainment.

The new set-top box-esque device will focus on gaming but will also be able to stream movies, music and other apps.

Similar to Amazon Fire TV, the Razer-Android console will have voice control built in, and a mobile app that can be downloaded on any Android tablet and smartphone will allow for navigation - much like the Google Chomecast.

The marriage of Google's software and Razer's hardware is a surprising move but seems ready to take on Fire TV and likely surpass Google TV in popularity.

"This is a console of the future," says Min-Liang Tan, Razer co-founder and CEO. "Built on Google's incredible Android TV platform, the Razer micro-console incorporates not only hardcore and casual gaming, but music, movies and other entertainment and social applications, all on an affordable system."

The new device is said to have an affordable price point and will see a fall 2014 release.