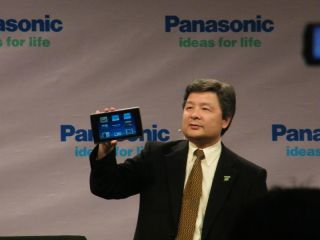 Panasonic's Veira Tablet is designed for use with 2011 Viera TVs

Panasonic has announced the launch of a new Android tablet for use with its new range of flatscreen TVs.

The Panasonic press conference at CES looked like it was shaping up to be a fairly drab affair until Shiro Kitajima, president of Panasonic, removed the device from his inside jacket pocket towards the end of his lengthy presentation.

Until then, most of the chat during the back-to-front press conference had been about market trends and projections for the year ahead. But when the device came out of Kitajima's pocket, the many hundreds of people in attendance suddenly woke up and the cameras started snapping in unison.

Viera Connect builds on Viera Cast's IPTV features and adds the ability to download and install apps such as games and utilities.

The Viera Tablet itself has several primary features. Firstly and most obviously, it can act as a remote control for the TV, so you can use it to choose content to watch from Viera Connect, and to browse available apps.

More interestingly, the Viera Tablet is able to stream live TV from your Panasonic telly so that you can continue watching your programmes even if you're walking around your home.

The tablet is also compatible with multi-angle content, like the kind you get with live sports broadcasts. So while you're watching the footy on the big plasma, you can watch alternative angles and replays on the tablet.

In the same way, if you see an interesting product advertised during a break, the Viera Tablet will allow you to quickly navigate to read more about and even buy the product.

Katajima said at the event that there's still a lot to come from Panasonic in this space, and that new IPTV features at apps will continue to be added over time.

Some would argue that Panasonic is playing catch-up with these features, as the Viera Cast service had fallen a bit behind similar IPTV offerings from the likes of Sony and Samsung. However, these new developments put it squarely back in the game and with a bang.

One of the Viera Connect apps that was demonstrated at the event was a 3D racing game which looked relatively pretty considering this is a TV we're talking about and not a games console. And we were also told of a fitness game called Body Media, which uses a bracelet peripheral to measure your pulse and blood pressure while you carry out the exercises on screen.

Games can be controlled using the Viera remote control or by plugging in any standard USB gaming pad.