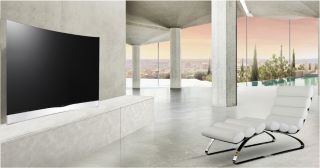 LG adds to the curvy line up...

Samsung has seemingly beat LG to being the first curved OLED TV sold in Australia and being cheaper by a grand, with LG announcing today that its curved OLED TV will cost $11,999.

Both sitting at 55-inches, Samsung's display costs $10,999 and is on sale now, while LG's curved OLED TV will go on sale from mid-September.

But while LG maybe a little late to the curvy TV market in Australia, the company indicated earlier this year that the it is eyeing production of larger curved OLED TVs.

Meanwhile, on the other emerging-TV-tech scene, LG has also dropped priced of its Ultra HD (UHD) TVs.

Perhaps due to the dismal selection of 4K content currently available, it seems more than likely that LG has dropped its Australian pricing for UHD to put it more in line with UHD displays from Sony, Hisense and Samsung.