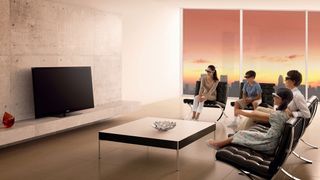 Television, I'm going to miss you.

Maybe it's a function of my innate laziness, but I still kinda like sometimes having someone else deciding what entertainment is offered to my eyes. I'm going to seriously struggle always having to make an active choice over what I watch.

Don't get me wrong, I'm not against choice.

I love having a vast array of channels, all offering different things at any given time. It's that sometimes I just want to let it wash over me, want to be a passive participant in my entertainment, like some Roman senator having televisual grapes dropped into my expectant mouth...er...eyes.

Traditional TV viewing though is in decline, with ZenithOptimedia publishing figures recently which show the percentage of our consumed media via TV dropping from 42.4% to 37.9%. It predicts that will shrink further to 34.7% by 2017.

The worst of it is that doesn't even account for the amount of time people spend watching on-demand or catch-up services on their TVs either. The real figure for the percentage of time folk spend watching linear TV then will be far lower.

So Netflix says the gig is up.

Hasting's point is that the level of innovation and choice possible in internet TV is something so profound that linear TV cannot hope to halt its demise. He also believes the rise in the adoption of Ultra HD TVs will only hasten the extinction of broadcast programming.

Many though believe live sport will remain the last bastion of linear TV, with its need for specific timings, but Hastings reckons the next World Cup will prove that wrong.

By 2018 4K TVs will be de rigueur - as 1080p sets have become - but he believes the constant improvements to the data capabilities of internet and content providers means your 4K match streams are going to come down the interweb tubes rather than through broadcast or cable.

Verizon is already getting onboard with this, looking to offer an over-the-top solution focusing on live events rather than the standard programming models Netflix offers. It wants to deliver content over the network to wherever your device lies.

If that's in the home, hooked up to your TV, all well and good. But equally you could be sat in the park enjoying the sun while watching the game.

The precedent was set with the last Super Bowl where Verizon used its multicast tech to stream to mobile devices without bleeding usage caps dry.

Think of the little guys

While there is a certain Luddite-tinged sadness to seeing the decline of the traditional broadcast models there is certainly a lot to be positive about too.

The idea of choice isn't just about the latest Netflix shows or Sky shunting content out into the ether to be grabbed at will, think of the little guys too.

There are a host of niche streaming sites popping up, delivering ultra-specific content to a hardcore fanbase. The horror movie genre is benefitting greatly from this, moving from a place where rampant piracy was making it all but impossible for distributors, like Charlie Band, to continue.

"We'd release a movie and ship DVDs, only to find it on the torrent sites for free," Band told Fortune. "It was concurrent with the demise of rental stores, which was our main source of revenue. We lost our connection with the fans."

He licensed popular Italian horror films for the home video fans, but we all know what happened to that market...RIP Blockbuster, how we loved your VHS bargain bins...

But now streaming tech means these distributors are able to get going again, are able to reforge the connection to fans via streaming services that specialise in such specific tastes. Band's Full Moon Streaming, and sites like Screambox and Frightpix, are all happily delivering the sort of horror you'd normally only stumble across at 3am after you'd rolled in from a night out.

But on-demand TV is actually starting to ape the more passive parts of broadcast programming; it's a two-way street after all. The latest Android TV update, demonstrated at this year's Google I/O, is going to be delivering Android TV Channels to the smart platform.

Under this setup broadcast TV channels will line up alongside your downloaded streaming apps. Google has partnered with a number of video streaming sites, like TED and the Huffington Post, to allow them to show live streams of selected content, next to standard TV channels in the viewing list, as though they were a standard channel.

Users can then hop into whatever is playing at that moment and stick with that or dive on in and dig around for their choice of content. It's potentially a neat little option, blurring the lines between traditional and streamed offerings, and apparently also offers the user the option to choose what they see in the 'live' feed.

Android TV's product manager, Allen Huang, is reported to have suggested you might be able to tailor it so you could create a channel which simply played Friends non-stop and you could drop in and out at will.

You know, if you really want to punish someone.

Unfortunately the list of streaming big-wigs signed up to Android TV Channels doesn't yet seem to include Netflix, Hulu or Amazon Prime. Those are the key players in the market we'd want to have as we scrolled through our EPG.

But then standard broadcast TV seems to be shifting to a less linear pattern now. Sky recently announced it would be putting the entire fourth season of Veep onto its Sky Go on-demand platform before showing the new series on its Sky Atlantic TV channel.

Is this the beginning of a new era then for broadcast TV? I'm not convinced linear TV is necessarily dying, but it definitely seems to be morphing into something else.

It's position at the top of the content tree is toast though.

We're no longer patient enough to wait week after week for the latest episode of that show we love and increasingly we'll see new full seasons available to stream before they start getting broadcast.

Linear TV then will survive in some capacity for those of us too lazy to make an active choice about what particular entertainment we want at that exact moment, or when we're too paralysed by the amount of choice on offer.

But it's almost inevitable it wont be able to hold back the stream.