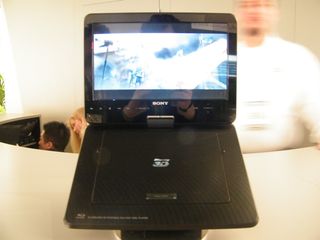 Another of Sony's glasses-free prototypes at this year's CES is a portable 10.1-inch 3D Blu-ray player.

Packing a glasses-free lenticular LCD panel with a resolution of 1366x768, the prototype certainly gave off the impression that it's a near-production product. It looked distinguished and very similar to the non-3D portable BD players out there.

It's an impressive little package no doubt, but there's a definite trend appearing here. Just like the other glasses-free 3D prototypes out here (not just from Sony), the 3D effect on this 10.1-inch display is fairly minimal.

There's barely any depth to the picture, and frankly you we had to look pretty close in order to get any 3D effect at all.

This early-generation lenticular tech does seem to work a bit better on the small screens, but there's still a definite lack of sharpness to be found in the Blu-ray image.

The picture is grainy – and it may be 3D, but it sure isn't HD. The fact that the 1366x768 resolution is broken up by the panel's lenticular filter means that the final picture your eyes perceive us well below the usual standards you'd expect from a portable Blu-ray player.

Add to that the fact that – if these go on sale at some point this year – they'll definitely be super expensive, we can't really encourage anyone to go out and buy one just yet.

That said though, we'll keep an open mind until Sony releases the finished product.