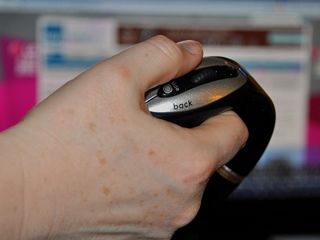 It's easy to control Windows or Windows Media Centre from a distance, on a big screen, with small movements because the Loop gives you very precise motion

Back at CES 2007, Linksys showed an unusual remote control that it was considering for a box that would stream music and video to a TV screen.

It was a large ring with three gyroscopes to track the movement of your hand so you could wave it in pretty much any direction to move the cursor or use gestures to zoom in and out.

When Linksys released its media system it didn't have that controller and so many of the people who'd seen the demonstration asked about the fate of the Linksys Ring that the original designers, Hillcrest Labs, decided to bring it out themselves.

The $99 Hillcrest Loop is both more advanced and simpler than the Linksys Ring would have been. It doesn't have gestures and it doesn't try to learn the kind of movements each user makes, but it uses the third generation of the Freespace technology (Logitech's MX Air used the first generation, with gestures) and the experience feels faster and smoother.

LOOP: The Loop is comfortable to hold, nicely balanced and fits any size of hand

KODAK REMOTE: The Kodak remote works in the same way, but you can be tempted to hold it up more than you need to

The Loop is very light in your hand; it takes two AA batteries that last for 100 hours – that's six to nine months in most homes says Hillcrest, because when you put the Loop down on its side it turns off – and it uses the weight of the batteries for balance, putting your thumb over the buttons when you pick it up (whichever hand you hold it with).

Left and right mouse buttons are separated by a scrollwheel and there's a 'hide' button to turn the cursor off so you don't move it accidentally (or if you find it annoying when you're watching a video.

Because it's a large ring that you grip in your hand there's no temptation to lift it up and point with it (with the right-angled remote for the Kodak Theater HD Player, which also uses Hillcrest's Freespace technology, we found we tended to point it at the screen, which quickly gets tiring).

ANY SHAPE: The Freespace technology means a remote control can be any shape; the Kodak remote and the Loop are nothing like the traditional bar of buttons

Because it uses RF technology, it doesn't matter where the Loop is pointing – move left and the cursor moves left, move up and it moves up. You only need to make small movements to shift the cursor, even on a huge TV screen, but because the Loop corrects for the minute tremors that everyone's hands make, you can target tiny icons and URLs easily; from the other side of the room we could easily click links in the Internet Explorer history pane that we could barely read until we clicked the (irritatingly small) zoom button in the corner to make the text on the page bigger.

The on-screen keyboard in Windows 7 is easy to use with the Loop – for typing URLs and search terms rather than emails, at least – and it works well with Windows Media Center, especially in those wide screens of album thumbnails; if you find the umpteen buttons in the Sky Media Center plug-in tedious to scroll through with the remote control, the Loop should let you breeze through them.

MOUSE CLICK: Select and Back are really left and right mouse buttons, separated by the scrollwheel; Hide locks and hides the cursor and the blue light goes out when you put the Loop down (or it eventually runs out of batteries)