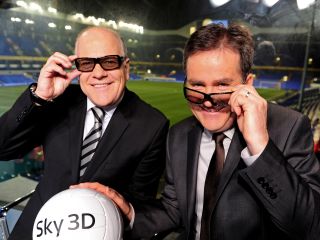 Sky 3D is coming to homes and pubs in the UK 3rd April, with Chelsea vs Man Utd the first game to be available to the public shown in 3D.

The day also marks the launch of the Sky 3D channel in homes, but this will not be showing the match – merely a showreel of selected 3D footage.

After the Chelsea vs Man Utd game, Sky has vowed to show five more games in 3D and only in pubs before the end of the season – although these are to be confirmed.

Non-Premiership fans, however, will be pleased to learn that the Coca-Cola Football League Play-Off Finals from Wembley Stadium at the end of May.

Speaking about the 3D channel, Brian Lenz, Sky's Director of Product Design and TV Product Development, explained: "It's fitting that one of the biggest games of the season will be the launch pad for our pioneering Sky 3D service. With 3D, seeing really is believing, so it's great news that over a thousand pubs across country will be able to show the magic of 3D to their customers."

Sky has struck a deal with LG to supply 'over a thousand' pubs in the UK with 3D TVs, which use the cheaper passive technology to create the illusion.

Both active and passive 3D TVs are compatible with the channel but it makes sense that the cheaper glasses are provided in pubs.

Sky previewed the 3D channel earlier this year to select members of the public and journalists, including TechRadar.

Although the 3D channel in the home will be a showreel to begin with, Sky is hoping to bring movies, sport, documentaries, entertainment and arts content later in the year.

The channel will initially be available for free for customers who subscribe to Sky's top channels and HD pack.