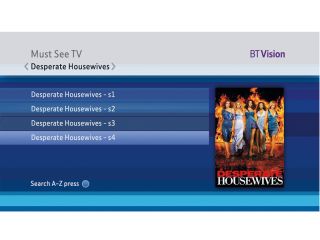 BT Vision - a lot of work to do

BT Vision's CEO Marc Watson has admitted that the service will not hit its target of between two and three million subscribers by December 2010.

The old target has been something of a millstone for BT Vision, the IPTV service which has not had the expected impact on the British TV market.

That goal was set by BT's CEO Ian Livingstone, but Vision Chief Watson has now downgraded that to around one million, which is still more than double its current subscription level of 433,000.

"We have not yet found the best way of explaining what the benefits are to consumers, and what [BT Vision] stands for," Watson told the Financial Times, when the 2010 target was raised.

Despite its financial might, BT has some major rivals in the TV arena that are making it difficult to get purchase.

Virgin Media's cable service has proven popular, not least because of the packages that include high-speed broadband such as the flagship 50Mb offering.

And Sky is closing in on the 10 million mark for subscribers to its satellite television platform.

In the latter's case, IPTV is very much on the agenda; Sky Player has been running from some time, offering live channels, premium downloads and catch-up TV over the internet and it is only a matter of time before Sky's HD set top boxes will be enabled for connection to an ethernet cable.