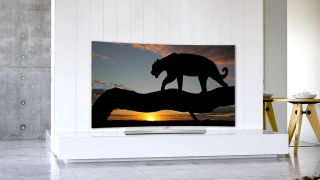 LG has been wowing people with its OLED TVs for a while now, but as of today, Australians have the opportunity to experience LG's 4K OLED technology in their own homes with its new 65-inch and 55-inch EG960T 4K OLED TVs – the first ever to go on sale in our country.

The televisions, which are wall-mountable, slim and slightly curved (but less so than previous curved models), features self-lighting pixels (with a pixel response time of 0.002ms), meaning that each individual pixel has the ability to switch off completely, allowing them to achieve truly deep and perfect blacks – this gives both televisions an infinite contrast ratio.

LG's signature Magic Remote is back with new features, including voice commands (which can now be recognised without internet connectivity), and the sets also come with equipped with harmon/kardon audio.

Both sets also have the ability to show over 1 billion colours, with a 6-Step Upscaler that gives all content that Ultra HD sheen, and have been designed and tested to last for at least 30,000 hours (or ten years, if watched for eight hours per day).