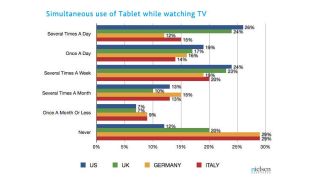 A study by Nielsen has found that TV viewers in the US are the most likely to be dividing their attention between the boob tube and a smartphone or tablet.

Unlike in drinking circles, there are no penalties for being double-parked and in fact it could be argued that rocking two screens at once makes you more sociable. Or just more likely to produce a please-god-let-it-stop-Twitter-stream-of-consciousness during the latest Jersey/Geordie Shore episode.

The study compares dual device use in the US, UK, Germany and Italy.

US viewers were most likely to go two-up with a tablet, with 88 percent of tablet owners and 86 percent of smartphone owners saying that they do so at least once a month.

The UK came in a close second, with 80 percent of tablet users clocking up heavy usage while watching TV, and 24 percent of those surveyed said they used their device several times a day in front of the gogglebox.

Meanwhile 29 percent of both Italians and Germans claim to never use a tablet and TV together.

Disappointingly, most popular second screen activity was simply checking emails, but there were also plenty of product- and programme-related searches.

After all, who's not guilty of IMDBing that dreamy actor you just can't remember the name of?

From Nielsen, via The Verge