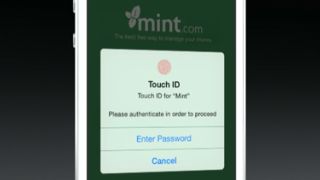 Check your finances using your fingerpint

Since inception, Apple's Touch ID fingerprint sensor has only been used to unlock the iPhone 5S and make App Store purchases.

Now at the Apple's WWDC keynote, the Cupertino company announced it will open up its fingerprint scanning technology to all third-party app developers with iOS 8.

To demonstrate Touch ID's expanded capabilities, Apple's Craig Federighi rolled a demo using Mint, logging in with a press of the finger rather than inputting the password on the touchscreen keyboard.

Addressing privacy, Federighi said all fingerprint data would remain stored and completely protected inside the iPhone's A7 processor.

"The fingerprint information is never exposed to third-party apps or the entire system for that matter," Federighi said. "It's very secure."

On the same stage, CEO Tim Cook announced Apple is refreshing the iOS 8 software development kit with the "biggest release since the launch of the App store" itself.

It's most profound change of all? The third party apps will be able to interact with one another in what Apple calls "Extensibility."

Applications from the app store thus far have only worked independently from one another. But now thanks to Extensibility they can extend and offer services to other apps.

Using a few examples Federighi highlighted how Safari could now bring up a Pintrest share sheet or access Microsoft's Bing translation service without needing to leave the browser. Apple's built-in Photos app, meanwhile, could extend its editing options to include filters from apps such as VSCO cam and the watercolor painting Waterlogue app.

Beyond inter-app functionality, third-party apps will have widgets that populate more information and features into users' Notification Center. In the near future, iPhone owners will be able to see sporting event scores from Sports Center right next their standard weather and stocks widgets.