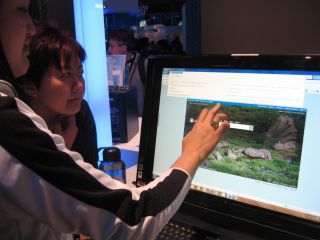 We were given a sneaky in-depth demo of Windows 7 by Microsoft today, going far behind the features trotted out by that funny-looking woman with overly-tonged hair during Steve Ballmer's keynote. Of course, you'll hopefully be able to download the beta for yourself. So here's our blow-by-blow guide of the features inside Windows 7 courtesy of Program Manager Nancy Phan.

Windows 7 will be more power efficient. As well as desktop dimming when you're not using the system, DVD playback also doesn't drain the battery as much as it does in Vista.

As you'd know, touch is a major part of Windows 7 and we saw this demonstrated using HP TouchSmart PCs. There's a new onscreen keyboard, which looks great while if you're using touch, Windows will automatically space menu items further apart.

Eight multi-touch gestures are also supported including swipes to scroll and move back between pages. Your internet history is also readily available from the touch keyboard, too. And if you want to write with your finger on the screen, it's also easy with an interface very similar to Vista's for tablet PCs.

Microsoft did show the Aero Peek OS X Expose-a-like desktop clearing feature during the keynote, but what it didn't show you – and Lord knows why – was the shake to clear feature. Click on the title bar of a window, shuffle your mouse around quickly and, hey presto, your desktop clears. Floating Gadgets can be resized too, a welcome addition.

Aero Peek is controlled by a rectangle on the far right of the taskbar. Hover over it and the desktop/Gadgets will show behind outlines of the windows, click it and you'll just see the desktop.

We saw the snap feature which lets you anchor windows, but it seemed better up close and personal. We weren't previously that impressed with it, since it seemed like windows could anchor when you didn't want them to. The feature to snap Windows alongside each other is useful though and no doubt it will be well received.

Jump lists in Windows 7 have been demonstrated on several occasions, but we got a better look at them here – the pinning and history features look very useful. In Word, for example, you'll be able to pin regularly used templates or documents to the menu.

Hovering over an open program icon brings up a preview of the window as in Vista, but there's also play/pause, forward and back buttons. Windows 7 makes it possible for any application to use this protocol to provide instant controls.

Finally, we also saw Homegroup in action, meaning you can send media content to any DLNA compatible device or another PC running Windows 7. We'd expect the upgrade will be available to anybody running Vista via a future update though.

If you're lucky enough to get hold of the beta, be aware that it'll time out on August 1ast. An early date for the Release Candidate perhaps?