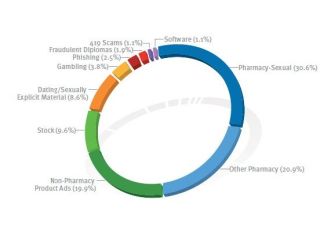 It probably won't come as a surprise to anyone to discover that the most common spam emails are those selling drugs like Viagra – making up over half of the total for unwarranted mail.

According to Microsoft's latest Security Intelligence Report, more than 51 per cent of all spam is pharmaceutical in nature, with 30.6 per cent selling sexual drugs and 20.9 per cent other medicines.

Those infamous 419 scams – mails from people purporting to be Nigerian princes and so on – makes up 1.1 per cent of the total, adding to other phishing scams (2.5 per cent) and advertising for fake diplomas (1.9 per cent).

The research suggests that only 8.6 per cent of spam is 'dating/sexually explicit' with non-pharmaceutical ads accounting for just under a fifth of the total.

Microsoft believes that the latest figures suggests that neither side has got the upper hand in the spam wars adding:

"Overall, the amount of spam that successfully evades the blocking and filtering techniques used by services like Windows Live Hotmail and EHS to land in users' inboxes has decreased dramatically from its peak a few years ago, though the trend has been much flatter over the last year or two, indicating a state of rough equilibrium between spammers and e-mail services.

"This should not be taken as a sign that the pace of advancement and adaptation has slowed on either side, but rather that both spammers and spam fighters continue to adapt to new techniques deployed by their opponents, creating a complicated sort of stalemate in which neither side has managed to gain the upper hand."