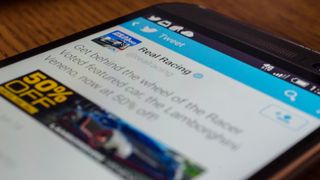 It's been rumored for years that Twitter would let users buy products from within tweets, and now that dream may finally be coming true.

Before you break out the champagne, note that this report is unsubstantiated at this time, but Re/code heard from "multiple industry sources" that Twitter has finally partnered with payments startup Stripe to make it happen.

This is the same company that was rumored to have been negotiating with Twitter all the way back in January 2014, and they've reportedly reached an agreement.

Businesses who want to let Twitter users buy their products directly from tweets will need to sign up with Stripe, these sources said, but users won't have to leave the Twitter app to finish a transaction.

Currently Stripe is believed to be Twitter's only partner in this initiative, but Re/code notes that that might change in the long run.

Users will be able to purchase goods and services by simply clicking or tapping on a "buy" button (or something similar) within a tweet.

They can then enter payment and/or shipping information, or - one can imagine - confirm information that's already been stored with Stripe or Twitter.

Twitter users on Android reported in early August that a "payments and shipping" option had appeared in their settings, although tapping on it had no effect. And in June a "buy now" button appeared in some tweets, linking to the website Fancy.

It looks like buying from Tweets is really happening, and given that assumption it seems likely that it will launch in time for the holidays. Who wouldn't want to do their holiday shopping and their tweeting at the same time?