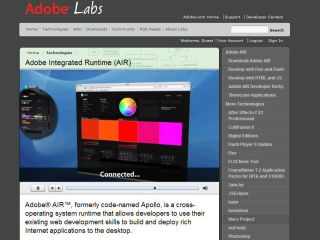 Adobe has announced it intends to produce applications that run on browsers online and on the desktop offline but using the same codebase for both. The company previously said it was intending to develop more apps for online use, but its latest statement of intent points the way to the software of the future.

The corporation is releasing its Adobe Integrated Runtime (AIR) app is released for testing today. Formerly codenamed Apollo, the software enables coders to write Rich Internet Applications (RIAs) that will run even when a computer isn't connected to the web. It also takes away many of the platform-specific problems that haunt developers.

"Apollo is for when developers want to take online applications and make them work offline on a computer," Michele Turner, Adobe's vice president of platforms, told Reuters . "We don't think the browser is going to go away."

eBay will be among the first to utilise Apollo. The online auction giant plans to use the tech to enable sellers to monitor the state of their sales without having a browser open. They'll also be able to change listings without being connected to the web - the changes will be uploaded next time they connect.

Microsoft has also previously announced its intention to develop more software that runs online. At the recent Mix 07 conference it announced its Silverlight app , that enables web apps - similar to Adobe's Flash - to run both on and offline.

Google is also known to be working on similar technology.