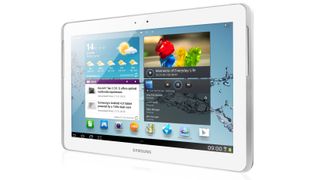 Flipboard is now available on Android tablets, including the Galaxy Tab 2 10.1

The digital, personalized news magazine Flipboard made the jump to Android tablets Thursday.

Flipboard found its new home just days before the holidays, when Flipboard Head of International Development Eric Alexander expects an influx of Android tablets to arrive under trees and in stockings.

Alexander said in a statement, "As more people buy Android tablets for themselves or others over the holidays, we wanted to make sure Flipboard is part of their tablet experience and deliver on a top request from our readers," as reported by CNET.

Flipboard began life as an iOS app over two years ago, and over the summer it became available for Android smartphones, Amazon's Kindle Fire line and Barnes and Noble's Nook e-readers.

Flipboard serves as a visual aggregator for both "world news" and "social news," according to its official Google Play page description.

Users can sign into their various social accounts and tell Flipboard what subjects they care about (i.e. video games, marine biology, etc.).

Flipboard then creates a custom e-zine tailored to your tastes, pulling news, photos and updates from sources ranging from the BBC, National Geographic and The Verge to Instagram and Twitter.

And best of all, Flipboard is free on all platforms.

According to CNET, Flipboard has been working with Samsung for a year to ensure that the app is up-to-snuff on Samsung's numerous Android tablets.

In August, Flipboard celebrated its second anniversary and revealed that it had 20 million users.