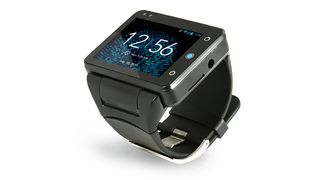 While there are a growing number of smartwatches that act as an extension of smartphones, there still isn't anything that's truly smart about a watch quite yet.

Neptune, a self-labeled "innovative" electronics company founded in 2012 out of Montreal, is out to create the world's first smartphone-replacing timepiece. It's device is called Neptune Pine, and it aims to put other smartwatches to shame.

The creation of 19-year-old Simon Tian, Pine is more akin to a miniature smartphone than phone-tied watch. It's packed with a beefed up 1.2GHz Qualcomm Snapdragon S4 dual-core Cortex processor and can make phone calls thanks to a quad-band GSM Radio and support for 3G HSPA+ and WCDMA networks.

Beyond a gobbling size difference, Pine does away with the need to tether smartwatch to smartphone - though you can still connect to the latter - as it wants to be "the only device you'll ever need."

To get the lowdown on what makes the Pine smartwatch tick we recently spoke with Neptune's Chief Technology Officer Aaron Wilkins, who also demoed the "first true smartwatch" over a video call.

For the most part, smartwatches and other wearables have functioned as extensions of smartphones for things like viewing notifications and tracking users health and not as wholly independent mechanisms unto themselves.

Wilkins said Neptune's goal is to move past device dependence with Pine.

"When we first started looking at the technology, we realized a standalone and independent device was within reach. We want to have a device that can stand on its own and we felt it was important that it was not useless without your phone nearby."

The company's smartwatch group has been working on Pine for a just over a year, going through several iterations and form factors to test all its components. "Really the biggest hurdle for us was actually the antenna and getting it to work on a smaller device," Wilkins explained.

Underneath the screen is basically every part you'd find in a smartphone, including Bluetooth, Wi-Fi, a micro-SIM card slot, accelerometer paired with a three-axis gyroscope, and GPS. A 5MP rear camera and VGA front-facing camera, each packing built-in flash, are also packed within.

In a video on its Kickstarter page, Wilkins claimed the Pine is the only smartwatch to allow for video chats thanks to the VGA camera.

The Pine Smartwatch snaps onto a wristband but it can also be used in hand like an over-sized Tamagotchi or GoPro-sized camera. To round out the whole package, the device comes running 16GB or 32GB of storage and Android Jelly Bean 4.1.2.

"The big thing was making sure everything works while still being able to get the right apps to work on our device," Wilkins said. "Many of the other devices on the market, they need apps to be custom tailored with that individual device and we wanted to avoid that."

Bigger than a smartwatch

At first glance the Pine Smartwatch is obviously going to be a bit large for a wrist-worn device, but Wilkins said it was absolutely necessary to go that big, at least to start.

"We tested a lot of different screens and we found this was the smallest screen we could have that still had a usable QWERTY keyboard," the CTO expounded. "More than just an extension of the phone, we had to be able to enter data into it, and anything smaller than 2.4 inches was too small when we would press more than two or three buttons."