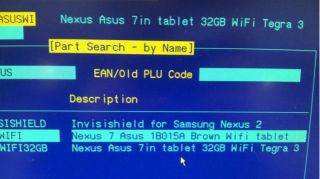 Revealing more than meets the eye?

Like something out of a Mission: Impossible movie, a database listing purporting to show a 32GB Google Nexus 7 appeared online Wednesday.

While the Nexus leak is tantalizing, it isn't the only information obtainable from the listing: there's also an Invisishield intended for a "Samsung Nexus 2" located just above it, pointing to the possibility of a Galaxy Nexus 2.

This information isn't enough to confirm the existence of such devices, but it's interesting to say the least.

Currently, Google's Nexus 7, produced by Asus, only comes in 8GB and 16GB variants.

With competitors like Amazon and Barnes & Noble churning out mighty and new tablets of their own, like the Kindle Fire HD and Nook HD+, Google and Asus are likely looking to extend both companies' stay in the affordable tablet market.

A 32GB next Nexus is certainly plausible, but the world might see a Samsung product first.

Leaks from last week reportedly showed photos taken with a camera from a device dubbed GT-i9260, a model number indicating a follow up to the Galaxy Nexus, as well as specs for the device's camera.

The GT-i9260, while not named so explicitly, is likely a Galaxy Nexus II.

Of course, the database listing could contain industry numbering that could render these theories inaccurate, but it will no doubt get the rumor mill churning at a perceptible pace.