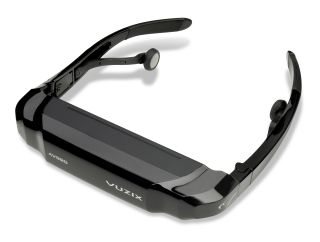 Would you voluntarily wear these on the Clapham Omnibus?

3 customers are being offered these rather nifty looking Vuzix iWear AV920 3D headsets in the UK as of this month.

"3 customers can now take a 62-inch screen wherever they go with Vuzix iWear," 3 informed us earlier.

Vuzix iWear ‘Bladerunner-esque’ headsets can be hooked up to almost any device that is capable of playing video – mobiles, iPods, DVD players, games consoles or camcorders.

Tiny high-tech displays inside the glasses create a virtual screen that the company claims is "the equivalent of watching a 62-inch plasma TV from the comfort of your own sofa" – the difference being that you are sat on the bus, looking like a robot from a 1980s electro-pop music video on MTV.

There's a robot on the tube!

The release continues: "iWear can be connected to all video-out enabled handsets such as the Nokia N95, enabling consumers to watch movies and play games on a crystal clear virtual 62-inch screen. This pocket-sized big screen experience gives users the perfect reason to watch mobile TV, play games or download the latest Hollywood blockbuster with their 3G phone."

If you don’t mind rocking the robot look, then you will also want to hear that the Vuzix iWear AV920 has built-in stereo speakers and gives five hours continuous use from a single charge.

3 has the exclusive to sell iWear here in the UK, putting it out at £199.95 TechRadar will bring you a full review as soon as we get the kit in to test out.