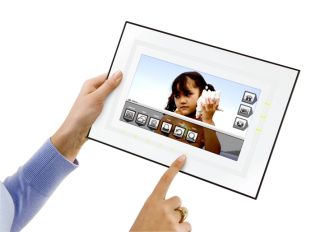 Kodak has added three new Easyshare digital photo frames to its portfolio, two of which boast a unique touch-control system, and all of which Kodak claims are able to display photos in “HD format”.

The new Quick Touch Border touch-screen system avoids smudgy finger marks on the actual image screen by positioning sensors around the outer rim of the frame’s border while allowing the user to intuitively control all manner of things with a single extended digit.

Helping this process is Kodak’s EasyShare software, which comes bundled with the frames, allowing the user to easily transfer pictures (and MP3s) from a PC or camera, or from the user’s own Kodak Gallery of online images.

As to Kodak’s claim that the frames are able to display images in “HD format” we remain somewhat baffled. In our experience digital photo frames in this price bracket, don’t tend to display images in anything even remotely approaching ‘HD’. In any case describing static image resolution as ‘HD’ is somewhat misleading in the first place.

Moving beyond Kodak specifically, to the digital photo frame industry in general it’s worth noting that the market is only just beginning to arrive at the point where the quality of the screens matches the pricetag attached to them.

Despite their growing popularity in recent years many digital photo frames still suffer from high price tags and poor screens – especially when viewed up close. Of course, that has already begun to change with screens boasting higher resolutions and lower prices.

To be perfectly honest, we’d much rather see the main players in the market ditch superfluous features like in-built MP3 players altogether to concentrate solely on screen resolution. That’s what really matters.

Hopefully, we’ll be able to bring you a review of the M1020 before then.