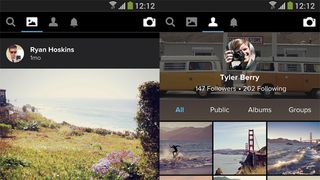 Yahoo's attempts to give its Flickr photo-sharing service a rebirth has continued with a complete overhaul of the apps for iOS and Android.

The completely redesigned apps for both platforms now feature a slick new feed that almost mimic the look and feel of competitors like Facebook-owned Instagram.

The photos appear in a single, scrollable feed with photos cropped to square dimensions, expanded to their full aspect ratio when tapped by users.

Users can also tap a single button to reveal the metadata for each photo, such as the camera used, the GPS position, focal length, aperture, exposure and more.

As well as photos, Flickr users can also capture 30 seconds of HD video for direct upload to their stream, while adding live filters in the process.

The app also enables photo fanciers to like, comment and share photos that sit in their feeds, while the profile pages are also decidedly Google+ and Instagram esque. There's also an overhauled search functionality and image recognition tech that tag items like sunsets and cars.

Another neat addition is the new auto-sync feature, which will automatically back up all photos at full resolution to the user's Flickr account, a la Google+ and Dropbox.

The only downside for Android users is the need for them to be logged into a Flickr account when previously they've been able to get away with signing in through Facebook and Google accounts.

Have you sampled the overhaul for iOS or Android? Let us know your thoughts in the comments section below. For the rest of you, here's a look at the new features.