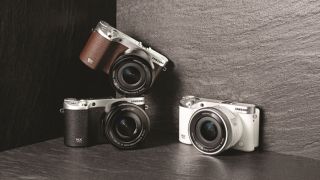 We've been really impressed with the performance of the semi-pro Samsung NX1, especially its image quality, so it's exciting to see the same sensor appear in a smaller, more consumer-friendly camera.

The NX500 is designed to offer some of the core features of the flagship NX1 but in a portable camera for everyday photography. It's up against tough competition from Sony, Fuji and Olympus, but the NX500's 28-megapixel sensor beats them all for outright resolution.

It also offers a wide ISO range, from ISO 100-25600, expandable to 51200. High resolutions and high ISOs don't normally mix too well, but Samsung's back-illuminated sensor (where the circuitry is moved to the back so that it doesn't obstruct the photoreceptors) should improve the sensor's light-gathering efficiency.

The NX500 is designed for simple and seamless sharing. NFC is built in, as is updated Bluetooth and Wi-Fi connectivity.

We wouldn't expect the NX500 to match the amazing 15fps continuous shooting speed of the NX1, but it still manages 9 frames a second – that's almost on the same level as top pro DSLRs.

It also has the Samsung Auto Shot (SAS) autofocus mode first seen on the NX1. This uses motion detection to choose the exact moment to fire shutter for 'jump shots' and other split-second subjects.

There's no electronic viewfinder, but the NX500 does have a Super AMOLED flip-up touch-screen on the back. It comes in black, white and brown and will be available from March 2015.