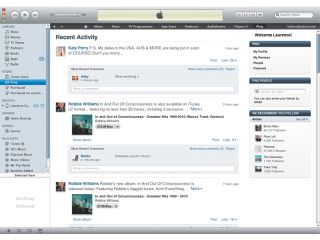 Imagine Ping crossed with Google Latitude. You're excited. We can tell

Apple's on a roll: as if destroying Facebook with Ping and wiping out Skype with FaceTime wasn't enough, it's going after Loopt, Foursquare, Gowalla and the rest of the location-aware social networking crowd with a brand new feature: Find My Friends.

Okay, I'm being a bit sarky. But I'm a bit baffled too.

There's no doubt that Apple's up to something. The enterprising folks at MacRumors have discovered a new field in the iOS Settings app with the label "FIND_MY_FRIENDS".

The settings refer to MobileMe, Apple's subscription-based synchronisation service, so you don't need to possess genius of Alex Reid proportions to work out that Apple's adding something called Find My Friends to MobileMe.

The consensus is location-based social networking. Find My Friends, the entire internet says, will enable you to - yes! - find your friends. Will it use GPS? Undoubtedly. Will it display people's location on a map? Almost certainly. Will it be elegant, and intuitive? Inevitably. Will it reduce your iPhone's battery life to approximately ten seconds? Quite possibly.

I'm sure Find My Friends will be beautifully designed, but if it turns out to be the kind of service the pundits are already predicting - and to be fair, all the speculation so far is based on a single data field, so everybody may well be talking out of their backsides - then there could be a few problems with it.

The first issue is that putting something into iOS doesn't mean everybody's going to use it. I thought Facetime would be massive, but the only thing about it that's massive so far is my own face when I forget to suck in my giant hamster cheeks.

The second issue is that location awareness is only useful if your friends are on it - so if they aren't, you need to connect to whatever they're using. That's something the existing location awareness crowd are beginning to realise, so for example Gowalla doesn't just use its own service: its iPhone app connects to Foursquare and Facebook, too.

And while we're on the subject of apps, the existing location-based services provide apps for all the major platforms, not just iOS.

Even if all your friends are using iOS devices, they still might not appear on your radar: remember that this appears to be a MobileMe service. How many of your friends use that? There are eleventy billion iOS users out there, but relatively few of them subscribe to MobileMe; Apple doesn't publish subscriber numbers but educated guesses suggest a couple of million tops.

My big concern about all of this, though, is that I suspect Apple doesn't really do social any more than Google does. I hope I'm wrong, but I can't help thinking Find My Friends could turn out to be the answer to a question that only I'm asking: what would you get if you crossed Google Latitude with iTunes Ping?