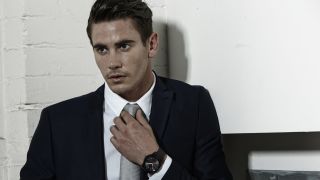 Welcome once again to TechRadar's roundup of all things phone related, your chance to listen the witterings of a selected madman, a man driven crazy by small piles of meat and peppermint tea.

I've just come back from the madness of Mobile World Congress 2015, having spent eight days out in Barcelona to see all the new phones we'll be hankering after in 2015.

Let me tell you: eight days is a long time to be wandering around eight hangars of handsets. But there were some real shining lights: The Galaxy S6 Edge is a brilliantly designed phone, with the slightly curved edges really adding to the impressive feel in the hand.

The HTC One M9 is also a phenomenal handset, although probably won't capture the imagination as well this year, given it looks a lot like last year's model. It's a bit harsh on a brand that's made the world's most well-crafted phone, but it didn't have much more to get right, so anything that happened this year would be iterative or a case of fixing things that ain't broke… neither of which seems like a particularly good idea.

But in the middle of every phone brand in the world hawking its wares (Apple aside, of course. It don't need no stinking trade show) there was something that perturbed me. A dischord in the harmony of ringtones. I realised I was really angry at smartwatches.

After seeing the new crop roll around, there was nothing in there that really pushed the message on. Nothing that said Android Wear was growing, becoming a mature platform and a real reason to recommend the second screen on your wrist.

A head of mobile for one of the big brands explained to me why he thought smartwatches were the business. The ability to follow directions on your watch, rather than getting a phone out and getting mugged. The option to reply to a message you get over Bluetooth in your car with your voice, a simple barking of 'OK Google' letting you tell the other half that you were leaving them for their best friend.

Sorry, but that doesn't sound like something I'd call a compelling reason to shell out a huge wedge of cash to do. It's cool, and if you've bought one of the increasingly beautiful watches you'll rind reasons for it, but it's not practical.

I'm sure Apple will make smartwatches cool, but if the world's richest brand can't make the technology viable, who will? Will consumers wait around for two years before Android Wear gets good or Pebble creates a more refined, adult interface?

Probably not. Smartwatches need to not just get good, but brilliant in the very near future, else convincing people to buy them is going to be a challenge even for a brand as big as Apple.

I didn't expect to be talking about Nokia this year from MWC, let along giving the brand a 'Highly Commended' title for Best Tablet in TechRadar's Phone Awards at the Barcelona show this year.

But we were, and that's because the N1 is a genuinely interesting tablet. Something that brings the openness of Android to something that's as well-designed as the iPad Mini.

It's quite speedy, despite 'only' coming with the less oft-used Intel Atom chip, and Deputy Editor John McCann is quite taken with it – read his romantic soliloquy here.

Suddenly his world went from single monochrome letters to a gloriously rich technicolour. His senses were momentarily overwhelmed as a cacophony of sound, smells and sights flooded into his newly-overhauled cortex.

"Winston… Winston… can you hear me?"

The Unicorn blinked slowly and tried to move. He was surprised how easily he could extend his limbs, like every joint was greased by tiny little monkeys, and flipped fluidly into a standing position.

The crowd of doctors jumped back, clearly not ready for such gymnastics from the mythical horse-like being. Winston snorted and stamped the ground, and then jumped back as something flashed before his eyes.

The list scrolled down madly, the schematics flashing rapidly in front of his eyes. New, sleek devices, with more power than he ever could have imagined. What is this? Where was he? Who were these people?

Winston's vision slowly faded as he sank to the floor. He could dimly hear someone speaking, catching the last of the words before he passed out.

"He's overloaded. There are too many new phones… he's used to handsets from 2008. Quick, everyone, phones out the windo…."

Tune in next week to see how Winston the Smartphone Unicorn copes with this world, a world he thought he'd never see, a world of complete wonder...

GET ON YOUR FEET WHOOOOOAAAAAA YEAH

(I would apologise for the grainy quality of the video, but it make me feel like I'm watching it on a PC from 1998. Who doesn't miss the days of 4Kb/s download speeds?)

Look at these people. They're living the techno life in a land where everything is just slightly too big or small. Look at him streaming Pic010.jpg to his TV, while she listens to some music on a pencil.

But it's not going to last. In three seconds she'll turn around, and gaze at the screen just as he accidentally puts up a 'candid' pic of him and her sister.

She'll then beat him to death with that weird computer control panel on the wall.

Pour one out – Leslie Nielsen at his very best here, interacting with Dutch prostitutes to discuss mobile tariffs in Amsterdam. Does it get better than that? I'd pay 25 Gilders to find out.

It's an MWC fest here this week – I'll obviously send you to the excellent hands on reviews of the Samsung Galaxy S6, HTC One M9 and Samsung Galaxy S6 Edge (oh, go on then, have the LG Watch Urbane as well for good measure) but here's the other good stuff that you simply have to read otherwise you're a pooface.

It's 6 o'clock, do you know where your phones are? Samsung and Apple go head to head.