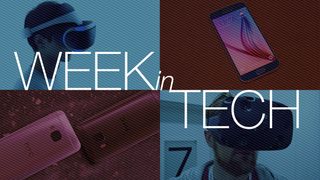 Some people look forward to their birthdays. Others, Christmas. For us, it's MWC and GDC. The former's the most important event in the mobile tech world, and the latter is the same for game development. This year didn't disappoint: we've got some of the greatest smartphones ever made, and some gaming news that might make even the most hardened gamer squeak with delight.

Samsung S6 gets close to the Edge

It's official at last: Samsung has unveiled the Galaxy S6 and its bendy-edged cousin, the Galaxy S6 Edge. It's the phone our mobile maestro Gareth Beavis has been waiting for, and he seems pretty happy: in his Galaxy S6 review he says that "Samsung is back with a bang." The S6 has a "great design", a "super sharp screen" and a "fast camera with good low light" – but it's not perfect. The battery's smaller, TouchWiz is still annoying and it's likely to be pretty pricey. Nevertheless, it's "a stunning phone."

Samsung wasn't the only firm showing off an Android flagship at MWC: HTC was there too with its excellent HTC One M9. Gareth was keen to get his hands on the latest model from "the phone designing master", but while the look is "brilliant" and backed up with "powerful innards", the camera's crap and there's precious little difference between the M9 and its predecessor, the HTC One M8. It's "a great phone if you're upgrading from two years ago, but that camera could be a real issue."

HTC: here, there and virtually everywhere

HTC had something much better to show us: the ridiculously exciting HTC Vive. It's HTC's VR headset, it's part of a team-up with gaming legends Valve, and it's "the future of gaming. Right here." That's what Gareth Beavis reckons, anyway, and he's so sleep-deprived right now we're not going to argue with him in case he totally flips out. "This is really an amazing piece of kit," he says. "Do whatever you can to try one out for yourself… it'll be a must-buy before long." Of all the things at MWC, the Vive was our pick for best in show.

Sony's VR vs the Vive

The HTC Vive wasn't the only VR headset on show this year. Sony's Project Morpheus has popped up with a new and faintly ridiculous design, but while there are kinks to be worked out "this could be the answer to every gamer's dream". It's very immersive, the display is very clear, it works with your PS4 and it shouldn't make you too sick. It's more accurate and responds more quickly than the first version, and it's lighter and more comfortable to wear too. Sony says the consumer version will launch in the first half of 2016. "This is the missing piece of the PS4 puzzle," Hugh Langley says, "and it's a big one."

Game on: Techradar goes to GDC

GDC 2015 has been a blast, with some truly exciting announcements such as the aforementioned Morpheus, Xbox One bringing games to Microsoft's augmented reality Hololens, Nvidia showing off Titan, the "most advanced GPU" ever built and its Shield, the world's first Android TV console, Valve announcing Steam Link to stream games from PCs to TVs and a whole bunch of Steam Machines to bring Valve's gaming platform to a living room near you.

We got to see the final Steam Machine controller, too, and it's an odd looking thing. We're still not sure the haptic pads will be the mouse replacement Valve says they are, but we're hoping to be proved wrong when the controller ships later this year.

Nvidia's announcements were particularly interesting. The new Titan X graphics card has 12GB of RAM and 8 billion transistors, and it will be available soon. The Nvidia Shield is pretty powerful too, offering what Hugh Langley describes as "high-end gaming for a brilliant price". Its performance will largely depend on the quality of your internet connection, but if your broadband is up to scratch the Shield looks like a winning combination of media streamer and games console.