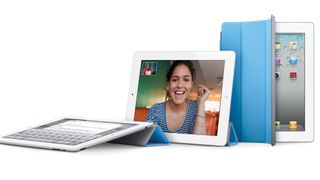 Day two of the Google IO 2012 developer conference kicked off on Thursday with a pair of long-awaited announcements that spreads the company's products even further onto Apple's competing mobile platform.

Brian Rakowski, vice president of Google's Chrome division, took the stage today at Google I/O to announce the new Chrome browser for iOS, with full support for syncing across platforms.

A universal app for iOS 4.3 or later, the free Google Chrome app will be available sometime Thursday through the App Store; the universal app works equally well on the iPhone, iPod touch and iPad.

Close on the heels of that announcement is also word that the company's cloud storage service Google Drive will finally arrive as an iOS app later today as well.

With 5GB of free storage, Google Drive is already available on Mac, PC, Chrome OS and Android, but the universal iOS app adds some real-time collaboration and slick search features that recognize the content of documents and photos.