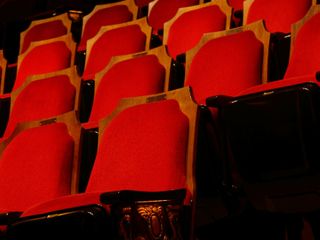 Shh! In 2003, a cinema in Ireland tried to use a jamming device to give its patrons a quieter time - it was ordered to cease and desist

Don't you hate it when people start yapping away on their mobile phone when you're at the theatre or cinema? Well, Russia's oldest theatre is employing the use of a special machine to put a stop to it.

St Petersburg's Alexandrinsky theatre, founded in 1756, has taken the drastic step of using a signal jammer device to stop people from making and accepting calls during a performance.

According to Reuters , Alexander Chepurov of St Petersburg's Alexandrinsky theatre, said: "Although the technology is rather expensive, our theatre accepted the costs in order to protect the artists from unpleasant surprises."

Jammers work by sending signals at the frequency mobiles use to prevent them from sending and receiving messages - but don't expect to find these machines used in theatres here.

They're illegal in the UK, even if they're being used for reasons that could be described as well-intended - like letting people watch a film at the cinema in peace.

"Let's be absolutely clear about this, it is illegal to buy one of these things for use in the UK and it's illegal to sell them in the UK," said an Ofcom spokesperson. "They could easily disrupt emergency calls."