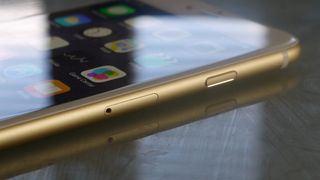 What's next for the iPhone's screen?

Apple has a fine pedigree when it comes to innovating the way we interact with our devices, and it seems that it's now looking to revolutionise the screens of its future iPhones – but what does the Cupertino company have in mind?

Rumours have been swirling that Apple is seriously considering implementing flexible screen technology ever since a patent emerged in March 2013.

In fact it was filed even earlier than that, in 2011, and because we've yet to see a flexible display so far, many people assumed that this would be one of those patents that got filed and then promptly forgotten about.

However Apple's interest in flexible screens is a rumour that just won't go away, and it has now emerged that major Korean display manufacturers are chasing Apple to choose them to build the next generation of iPhone screens.

As Business Korea reports, an industry source has said that Apple is "serious" about bringing organic light-emitting diode (OLED) displays to iPhones to improve colour accuracy and brightness.

Apple uses a flexible OLED screen with the Apple Watch, and Korean display manufacturers are keen to get Apple to include the technology in iPhones.

The desire of manufacturers to expand their market isn't that surprising, and it certainly doesn't mean Apple will end up including flexible screens.

However a source was quoted as saying that "It is very likely that the first flexible iPhone may be introduced in 2018, as Apple's top-tier display suppliers are working on it".

We wouldn't discount the possibility of Apple including a flexible display in a future iPhone at some point, but at the same time we can't really see Apple changing its plans due to some pushy manufacturers.

Even if Apple doesn't go with a flexible screen, it's looking increasingly likely that we will see a number of improvements and innovations in the screens of the iPhone 7 and beyond.

We've heard numerous rumours that Apple will be bringing Force Touch, which had its début with the Apple Watch and new MacBook, to the next iPhone.

This could tally with what we've heard about the iconic Home button being ditched – as it seems that Apple is looking to change the way we control our iPhones using the touch screen.

Apple might also be looking to toughen up the screen by possibly moving to scratch resistant sapphire screens. However, although these rumours keep cropping up, we've yet to see the technology appear on an iPhone.

Apple converted its sapphire screen factory into a data centre earlier this year, which also makes this slightly less convincing.

Some of these rumours are more far fetched than others, but a theme seems to be emerging that Apple is seriously considering how it can revolutionise the iPhone screen – which is great news for us.