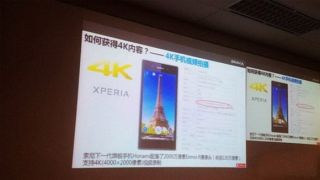 We don't know that many concrete facts about the rumored Sony Xperia i1 (aka "Honami"), but that hasn't stopped a barrage of rumors and leaks from giving us an idea of what to expect from Sony's purported phablet.

The larger successor to the Xperia Z, the Xperia i1 is believed to come with a robust 5-inch HD display, which should make pictures taken with the rumored 20MP camera (at a 3936 x 5248 resolution) look very nice.

Of course, that 20MP camera might also be perfectly suited for shooting video in 4K, which is just what the latest info surrounding the Honami seems to suggest.

According to leaked promotional materials, Sony is planning on releasing the first phone to allow users to shoot video in 4K resolution, which perfectly suits the Japanese company's plans across its own brand.

That Sony might be bringing the ability to capture what it's calling 4K video to a device said to be as beastly as the Xperia i1 isn't all that surprising.

Considering the phablet is expected to come with a 4K-capable 2.2GHz quad-core Snapdragon 800 chip, it actually may have been more shocking to learn the phone wouldn't use 4K in some way.

The Bravia branding on the slides in question lends this report a bit more credence, as does the tagline, "How do you get 4K content? By shooting videos with a 4K cellphone."

Remember though, the Xperia i1 still hasn't even been announced, and it certainly wouldn't be the first time rumored features didn't make it into the first iteration of a new smartphone.

With IFA 2013 just around the corner, we may not have to wait long to learn just how true these reports are, but until Sony delivers exact specs itself, we're not going to get too excited about the possibilities of shooting 4K with our smartphones. Yet.