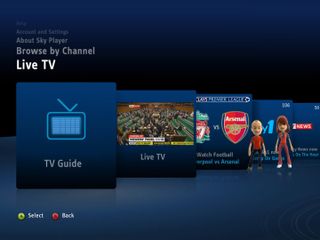 Samsung is looking to increase the presence of on-demand video on its smartphones, with an embedded Sky Player likely for future Android Galaxy devices.

Simon Stanford, the UK and Ireland MD for Samsung's mobile division, told TechRadar that BBC iPlayer was just the first step in bringing more on-demand video to its smartphones:

"[BBC iPlayer] has been a big push for us, and we're looking at Sky Player too, which is something that's going to be coming along too.

If you look at evolution of where these kinds of apps are going to go, I think we're [eventually] looking at an extension of a Sky box onto your phone."

"The interesting thing is the idea of a converged device is something people have been talking about forever, but it's here now," added Stanford.

"We can stream whatever you're watching straight onto your TV [via Samsung's AllShare app], and for the VOD element, we've already got that because we have Lovefilm streaming on our TVs, and Samsung Movies on our phones too."

Whether Samsung will be giving a bigger push to its on-demand Movies service on smartphones now that HTC has unveiled its Watch platform remains to be seen - Samsung's service is slightly more expensive than Watch and still isn't compatible with the Galaxy S2, the company's flagship phone.